We do think some very bad economic times are coming soon.

Video from There are no sunglasses.

Many people will be confused. A blame game is coming.

We expect something else will probably be arranged to cause a big distraction from the huge economic problems and to also confuse the blame game.


Did you hear about the fifty nuclear missiles that went accidentally offline this past Saturday at Warren AFB in Wyoming. You know, Dick Cheney's home state? 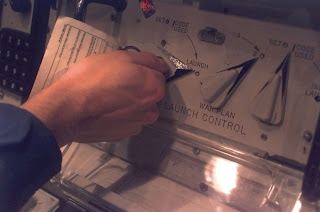 Fifty nuclear missiles, evidently controlled by something similar to this trusty ancient analog panel, went offline by accident on Saturday.  Photo from Wired.com
This is the best we can afford with the US defense budget?
Or is this a joke?
Actually, this entire incident seems like a joke. It comes to us from The Atlantic, and Wired, and The Weekly Standard. It appears political. They even highlighted the conspiracy angle for us. Gee thanks! What's left for us to do? How about we just call the whole thing a mindfuck.


The White House response to the incident has been jaw dropping. When pressed on the critical security lapse, an unnamed official told Marc Ambinder of the Atlantic (emphasis mine): "to make too much out of this would be to sensationalize it. It's not that big of a deal. Everything worked as planned." The Atlantic


Lets recall the Minot incident. Six people from Minot AFB, who were all directly involved as loaders or pilots, died in "accidents" within days of the incident.

Scrolling down to the bottom of the CLG page, we read the astute comments of a retired military person, Mr. Don Lee, US Navy vet, retired. His comments are regarding the Minot incident, and in response to an anonymous military commenter who brushed the whole thing off. Specifically regarding the press coverage:


The military reporting of these incidents is itself contrary to military secrecy, reason, and law. I suspect an altogether different agenda. I believe that this high-level press coverage of a screw up, carrying nukes on B52s, is designed to use the US Media [gasp, they’ve never done that before!] to pressure Iran to meet US demands.

The US military would never release to the public any real classified data, especially including data about moved or missing nukes, without authority from the White House.

The US media is NOT entitled to print or distribute classified information, and is NEVER brought-in as it was in this case, so rapidly or on such an elemental and critical faux paus.

The only logical excuse for the sudden and detail-filled news coverage of this event is that of an intentional release of data for political purposes.

Big problems are coming. And distractions. And a blame game is coming too. 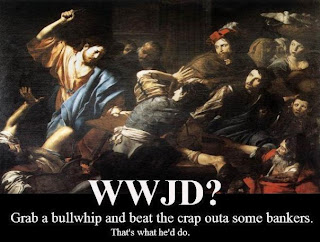 No doubt the aliens from outer space are coming to save the day, so I'm told.

Love the poster! But it reads between the lines..."beat the crap outa some MORE jews"

Whatever sequence of events that’s coming has been a long time in the planning. The money supply/economy has been a plaything of the ‘elite bloodlines’ for centuries. The coming crash was deliberately instigated and implemented.

As for the nukes, they have not been accounted for anywhere nearly as tightly as we have been led to believe. They are always a guaranteed way to panic the herd.

The only X factor is how we react. Ignore whatever the MSM states and remember what we have learned that last few years. Fear will be the expected response – demanded even. Remember to keep love in your heart also. Buckle up and enjoy the ride.

Ignore the UFO reference and this video has a timely message.


Follow the Ufo reference and remember Reagan's dream of a ufo invasion to unite the human race, before viewing the following. After all the other bogeymen have lost their edge, why not fake an alien invasion as a last resort?

This is another good article on the Minot AFB nukes.
http://www.globalresearch.ca/index.php?context=va&aid=7158

Peter, thanks for those videos. it must be the "last card" they have. and no doubt it would be effective on a lot of people and turn into the ultimate divide and conquer issue. it wouldn't work as Reagan envisioned because they have long lost the element of surprise. i hope! of course, they'd have to be in control of the internet...

let's hope they have really bit off more than they can chew with their plans for final world domination.

Chuck, thanks for putting that link up. i was rushed this morning and that is an excellent overview of the Minot incident.

Aan, you can't be confused. sorry but we can't allow that ; D

Hey Ap, no doubt a collapse is coming, as is intended.

I am hoping we all have some skills honed to get through this.

Divide to conquer will or should become obvious.

I think a war is coming as the big distraction, another war.

hi Pen. yeah, a war of some sort. maybe a war with aliens... who knows! the main thing i think is for people not to panic. the people who listen to corporate media will be inclined to freak out. i read a good article about it this morning here:

When it all really starts to kick-in, we will all be left to our own survival skills and preparations to stay alive. All of those friends and relatives who consider us strange, or borderline psychotics because of the knowledge we attempt to share with any of them, will, on that day,have made no preparations and be completely oblivious to what is unfolding around them. On that day, we will become their primary source of hope and this axiom will no longer apply: "A prophet is not without honour, save in his own country, and in his own house." A very wise man said that, when looking forward to our era. I hope all of us have at least purchased guns and ammo before we see firsthand the "post-apocalyptic" scenario.

i hope the weapons won't be necessary but whatever happens, i agree that the scales will fall from some eyes and maybe we'll have a little round of 'how do you like me now'...