exaggerating the threat as a pretext - UPDATED

UPDATE: Freedom is born through education, not in battle in the mountains

via There Are No Sunglasses

Does some truth emerge about what happened? That it was not a helicopter crash after all? This is reportedly video, posted today, of the military people killed by gunshot and possibly explosion, in an ambush.

They were attacked in the Komarob Gorge, perhaps by other Tajiks. The author appeals to Tajiks not to kill each other in the service of the Kremlin, Washington, Tehran or Tashkent. We agree.

It has been over a week after the tragic death of 28 military Department of Defense of Tajikistan, shot in the convoy, follow the road through the gorge Komarob. We can say that this attack was the beginning of large-scale militia clashes government forces, terrorist groups and militants of the former armed opposition in the Rasht area.

As a result, dozens of people killed on both sides, continuing the military-political tension and grief of families of the victims. Nonprofessional video footage from the blast site, one of the representatives of power structures, demonstrates the fact that the machine of government forces was ambushed and fired upon from all sides, and that is why our military was virtually no chance for salvation.

In the post driving a wedge, we reviewed the theory that we first saw at News Central Asia (the Final Solution Frenzy series, via There Are No Sunglasses) that an 'international corridor' is being hacked out from Balochistan in the south to Kyrgystan and Manas Transit Center in the north, and that this corridor is shaped like a wedge due to the geography and borders involved, and that this wedge -- if controlled -- would effectively split China and India from Iran while ensuring two routes out for the one product Afghanistan produces, heroin.

This plan, if that's what it is, requires annexing a huge piece of Pakistan (Balochistan), most of Afghanistan, and a portion of Tajikistan in order to secure a route to Kyrgyzstan. Kyrgyzstan itself seems to be largely in hand due to the long-term presence of the US military at Manas, extensive corruption with the Bakievs that took place over a period of years, and replacement controlled assets now in place (aangirfan: CIA put Roza into power?).

In July 2009 reports began to emerge of the Taliban in Tajikistan, where there had already been drug smugglers. An old problem, and suddenly a "new" problem. Supposedly these Taliban were being driven from Pakistan and Afghanistan, and taking refuge in Tajikistan because there is a history of Islamic opposition there.

But we suspect this is simply the next stage in the plan to secure the point of the wedge to Manas. 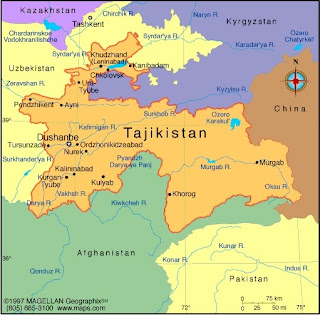 Tehran Times: Fears of Swat Valley spillover in Tajikistan, July 2009
1) "Tajikistan is a main route for drugs smuggled out of Afghanistan, the world's largest heroin producer." ~ Tajikistan official -- A TRUE STATEMENT
2) “I think we are seeing, looking globally, that Al-Qaeda is relocating its forces into the rest of the world.” ~ anonymous US official -- A NARRATIVE TO CONFUSE THE ISSUE?

US President Barack Obama has sent thousands more U.S. troops to Afghanistan in a bid to defeat the Taliban and Al-Qaeda. And that is not necessarily good news for Tajikistan, which went through a civil war after the 1991 collapse of the Soviet Union as militant groups like the Islamist Movement of Uzbekistan (IMU) flourished.  Groups like the IMU -- designated a terrorist organization by Washington -- were pushed into Afghanistan after a 1997 peace deal ended the civil war. But in recent weeks, signs have appeared suggesting that the militants are back.

...During a recent visit to the Rasht Valley, long a stronghold of Tajikistan's Islamist opposition, government checkpoints maintained a chokehold over long stretches of punishing mountain roads leading into the area.


Some Tajik locals had reported that foreigners, possibly Chechnyan, had turned up in their remote villages with euros and rubles and suitcases full of yummy cakes to pay for their rides out from the capital Dushanbe.
Therefore, not every stranger in Tajikistan is coming from Pakistan and Afghanistan. We don't know where these people come from or what they want in Tajikistan.
But the people involved, whoever they are, are consistently linked to Islamic groups. Linked for trafficking, and linked for terrorism.
But do Muslims control organized crime? No they do not. Perhaps some of the Islamists in question are not Muslims at all. Perhaps some of them are greedy Muslims. Perhaps some of them are stupid Muslims. Perhaps they are just a bunch of no good criminals and/or intelligence operatives pretending to be Muslims as they smuggle drugs, while making it look like terrorism, and then blaming it on Muslims while they count their money....?
From driving a wedge:

In July 2009, Turkish Weekly reported the arrest of international drug traffickers in Tajikistan.

According to rapid search data, it was established that one of the main channels for smuggling drugs from Afghanistan was through the territory of Darvoz, Tavildara, Rasht and Jirgatol districts to Kyrgyzstan.

Those districts are right in the narrow center of Tajikistan, on a direct route to Osh (Bakiev's home town). Trafficking was linked to the "international terrorist organization Islamic Movement of Uzbekistan."

On 25 September 2009, The Telegraph (UK) reported that Pakistan has discovered a 'village' of white German al-Qaeda insurgents

According to this article:

Pakistan has discovered a group of White German jihadis in a village in Waziristan, a part of Pakistan where the Taliban is strong.

A German foreign ministry spokesman told The Daily Telegraph they were negotiating with Pakistani authorities for the release of six Germans, including "Adrian M", a white Muslim convert.

They are being held in Peshawar after their arrest in May 2009.

"Abu Adam" may be of Turkish descent.

Adam received weapons training from the German army as part of his national service.

He later spent three years training at the Federal Office of Statistics.
According to an article at Wkipedia (CIA activities in Uzbekistan - Wikipedia, the free encyclopedia), the CIA promoted the Muslim religion in Uzbekistan (Coll,Steve (2005). Ghost Wars. Penguin. pp. pp. 104–105.)

So it seems that people can start out anywhere, with any intentions, but once they pass through Pakistan, they become terrorists. That Pakistan trip makes it official. They can start out as white German spooks or drug traffickers, fully trained. Doesn't matter. In the end they will be murderous Taliban or al Qaeda Islamists who trained in Pakistan. Perhaps we misunderstand. But that is what it looks like from here. 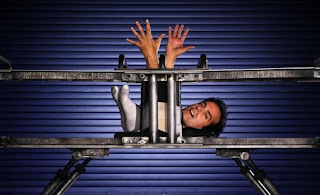 October 5, 2010: 'German militants' killed in US drone attack in Pakistan


With this information in mind, we think stories like this bear scrutiny.

Twenty-eight troops were killed Wednesday when a military helicopter crashed in a possible militant strike, the sources told AFP, although public statements insisted only four were killed in an accident.... A high-ranking Tajik military source, speaking on condition of strict anonymity, said that it was possible that the helicopter had been shot down by a missile fired by Islamists from their mountain hideouts. Another six troops were killed in a separate incident caused by the accidental explosion of a mine late Wednesday, according to a military source.

And this is the image that comes with the story: 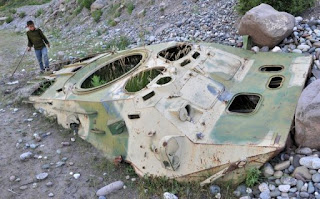 Caption to this image reads:
"28 troops died Wednesday when a helicopter crashed in a possible militant strike."

Shouldn't it say something like, "Boy waves stick at picked over carcass of tank destroyed in XXXX?"
What is it with these news agencies? Several stories carried this picture. Do they just think they can throw anything out there and people won't notice? Just stick in a file photo and call it a day? What kind of message are they trying to send? How about: IT DOESN'T MATTER... THIS IS NOT REAL... THEY'LL BELIEVE ANYTHING...?

Tajikistan's National Guards on Thursday denied multiple media reports that 28 people were killed in a helicopter crash in a volatile area where government forces are battling Islamic rebels, insisting the death toll was seven. Spokeswoman Hainirisso Komilova dismissed the report carried by Tajik news agency Asia Plus and Russian news wires. The reports quote unidentified security sources as saying the victims included 21 soldiers of an elite anti-terror unit. Komilova said four people died instantly when the Mi-8 helicopter went down Wednesday near the town of Garm and three died later as a result of their injuries. Garm is the main city in the volatile Rasht Valley, where government troops have been conducting a security raid against Islamic militants who ambushed a military convoy last month, killing at least 25 soldiers. Komilova said the crash apparently was caused by a technical problem.

OK, fine, but that doesn't go with the picture either. Is there a photo of the helicopter crash that killed seven?

Another story (SIFY News) says that the people who may or may not have been killed were high level military:

About 20 members of elite units of the Alpha National Security State Committee and seven members of the National Guard, including a colonel and two lieutenant colonels, were killed in the accident, the source said.

That would be tragic... IF IT WERE TRUE... but so far the evidence is looking a little shaky.

Military sources say up to 34 Tajik troops were killed in two separate incidents in the east of the country, in an area where a military operation against Islamist insurgents is under way. However, officials have given a much lower death toll in what was described as accidents. Military sources said up to 28 troops were killed when a military helicopter crashed in Rasht Valley early on October 6 in what the unnamed sources said was a possible missile strike by insurgents. An official statement said four members of the National Guard were killed and said the crash was due to technical failure. Meanwhile, another six soldiers were killed in a landmine explosion in the same area. Several others were injured in what some military sources described as an accidental explosion. 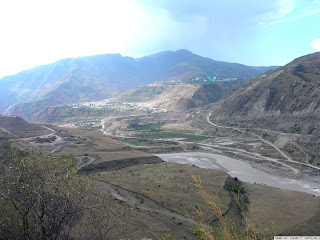 Caption for this image reads: "Rahst Valley after armed clashes."
No sign from here of the smouldering helicopter wreckage that killed dozens...?

Long-time President Imomali Rakhmon's government has jailed more than 100 members of banned groups this year in its battle against Islamist radicalism. Critics say the government exaggerates the threat as a pretext to target opponents. 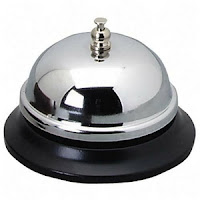 ding
And why do they need a pretext to target opponents?
Perhaps because someone wants to secure the drug trafficking route through Tajikistan?
Because illegal drug trafficking is INSANELY PROFITABLE?
Posted by A. Peasant at 10:44 PM

Many thanks for the links.

it must be funding a lot of things off the books.