Is it fair to question the PERSONAL JUDGMENT of people in office or running for office? We think so.

We do not vote anymore. We consider the system completely broken. And we do not pay particularly too much attention to politics. We think politics is a big playpen to keep many millions of people busy and entertained and pouring their money and energy into activities that will never actually benefit them. We also consider that politics keeps a much smaller number of people EMPLOYED off of these many millions who don't actually benefit. 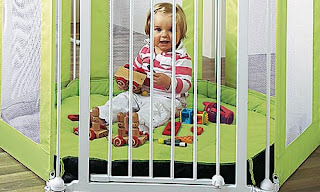 No thanks.
Image from The Guardian.

Before people consider voting, we think they should make some effort to DISCERN the judgment of those seeking power.

Are they weak? Are they corruptible? Are they narcissistic? Are they sociopathic? If so, why vote for them? If you can't find someone worth voting for, why vote? Voting affirms the system, and the system is totally broken. Do you patronize businesses that abuse you as a customer?

Do you want change? Stop voting. Stop giving your attention and time and money to corrupt politicians. Stop watching teevee. Reclaim that time to do your own research. Use your Google-fu.* Get a grip on what's really going on.


Only a person of strong character can have a chance at standing up to the MASSIVE SYSTEMIC CORRUPTION endemic in our society. If you don't understand the scale of corruption, you won't see the problem. That is why the controlled media does not talk about the true scope of corruption. They prefer to keep as many people in the playpen as possible. People stay in the playpen as long as they think that voting will make a difference in their lives.

If you don't understand the scale of the corruption, you won't understand that powerful people don't want anyone with good character ANYWHERE NEAR their control centers. A person of good character might blow a whistle. Therefore, any person who makes any political progress must be completely controllable, or else they will be taken down, or if necessary, taken out.

Therefore, we assume there is some spectacular dirt on EVERY SINGLE SENATOR, and probably on EVERY SINGLE REPRESENTATIVE who has been in office for a few years. Compromise = control.

We assume that anyone new to the system will also be either already corrupt or else readily corruptible. Otherwise, they won't BE ALLOWED to get very far.

Anyway, what draws people to run for political office in the first place?

Christine O'Donnell. We wrote about Christine before. See: process of analogy.

Christine O'Donnell has a familiar face and a nice smile.

Aangirfan calls to our attention that the Tea Party seems to be run by the CIA?

And we learn more disturbing things about Christine O'Donnell. 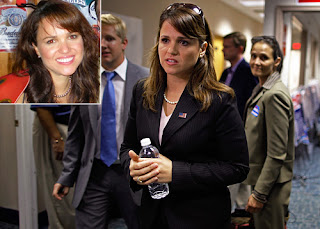 Wilmington, DE – Communications Director Doug Sachtleben stated in response to the universal condoning of the Gawker story:
"This story is just another example of the sexism and slander that female candidates are forced to deal with. From Secretary Clinton, to Governor Palin, to soon-to-be Governor Haley, Christine's political opponents have been willing to engage in appalling and baseless attacks — all with the aim of distracting the press from covering the real issues in this race. ...

The National Organization for Women (NOW) on Thursday condemned the tabloid website Gawker for publishing an anonymous account: NOW issued a statement late Thursday stating that "sexist, misogynist attacks against women have no place in the electoral process, regardless of a particular candidate's political ideology."
"NOW repudiates Gawker's decision to run this piece. It operates as public sexual harassment. And like all sexual harassment, it targets not only O'Donnell, but all women contemplating stepping into the public sphere," said NOW president Terry O'Neill.

Talk about changing the subject. Christine's campaign would like people to see her as a victim of sexism. They would like you to think that the question of her character is a DISTRACTION from the real issues.

But in fact, character is all that matters, whether male or female, young or old.

Foolish and easily corruptible people will never bring about change in the system.

If you want change, don't vote for silly people.

If they are all silly, don't vote.

*All credit to Gallier for Google-fu (in comments).
Posted by A. Peasant at 10:59 AM

The New Woman Order is a useful vehicle - Should anyone disagree they're a woman-hater.

This from Da Black Whole:

'Sarah Palin is blaming gender bias for the controversy over $150,000 worth of designer clothes, hairstyling and accessories the Republican Party provided for her, a newspaper reported Thursday.

Like her countrywomen and their emascuthugs, Sister Sarah only makes war on those who aren’t allowed, or able, to fight back . . . like male mooses (sp?). Anyone notes her hypocrisy, well, obviously they’re misogynists. Criminal misogynists.'

If Hill wants to attack Iran u can bet it'll be for TeamWoman and TeamEffeminatedMan.

Real men and women will be used as cannon fodder. All dissent will be met with a rerun of the Zapruder film.

Save gas and stay at home away from the polls. Buy yourself a cup of coffee and think of it as a conservation effort.

Interesting video HERE
Hillary will be the next Prez. Bill is already out campaigning for her in this video.
The zombie tee vee heads are still drinking the politicians and MSM kool aid, as seen in this video.
Notice Bill clinton's expression @ 3:40 when "end the fed" is yelled at him.
The thugs call him(the "we are change" videographer) faggot!! :P
If they only knew Bill & Hill's puppeteers were faggots.
Ignorance is strength.
Good post AP!!

Yeah, I've long since quit voting. It's compulsory here you know. I suspect that somewhere, at some ancient address, is a letter asking if I had a good reason for not voting.

Mayer Amschel Rothschild's declaration Give me control over a nation's currency and I care not who makes its laws is one thing, and me giving it the big thumbs up is another. I'm sure you understand.

PS Should a candidate stand up who is prepared to disband the Reserve Bank and put monetary policy back in the hands of people who are not untouchable please get in touch because then I would be only too happy to vote.

Good call. These people are all compromised, in one way or another. Ultimately, the entire political, economic, and legal system needs to be purged of these criminals. By continuing to participate in the absolutely corrupted "political process", we are giving it legitimacy, which it has clearly lost many moons ago (at least to those who are actually paying attention...).

Peter -- really good video. it shows how brainwashed the people participating in politics still are. they have no idea who their enemies are.

and the irony of calling someone a faggot who is for ending the fed, the fed which is giving it to us up the backside... i mean seriously....

and clinton mentioning haiti.... it's criminal.

nobs -- your letter is too polite mate. channel your nasty pirate.

john friend -- have you read dave mcgowan yet?

the pedophocracy
there's something about henry

gosh that poor woman AP, she is a victim, we as women should stick up for her.

Isn't that what you should think?

I guess we should only attack men who whore around?

i mean, the guy is a total cad. i'll give her that. but if she didn't hunt him down and get drunk and throw herself at him, none of this would have happened.

and she's no teenager. this happened three years ago.

and total weirdness about her "perpetual virginity."