not your monkey - UPDATE

UPDATE: DHS releases internal memo about how to deal with people who don't like the TSA policy. Evidently the memo is classified but this Canada Free Press article relates the salient points.

The memo, which actually takes the form of an administrative directive, appears to be the product of undated but recent high level meetings between Napolitano, John Pistole, head of the Transportation Security Administration (TSA),and one or more of Obama’s national security advisors. This document officially addresses those who are opposed to, or engaged in the disruption of the implementation of the enhanced airport screening procedures as “domestic extremists.”
The introductory paragraph of the multi-page document states that it is issued “in response to the growing public backlash against enhanced TSA security screening procedures and the agents conducting the screening process.” Implicit within the same section is that the recently enhanced security screening procedures implemented at U.S. airports, and the measures to be taken in response to the negative public backlash as detailed [in this directive], have the full support of the President. In other words, Obama not only endorses the enhanced security screening, but the measures outlined in this directive to be taken in response to public objections.
The terminology contained within the reported memo is indeed troubling. It labels any person who “interferes” with TSA airport security screening procedure protocol and operations by actively objecting to the established screening process, “including but not limited to the anticipated national opt-out day” as a “domestic extremist.” The label is then broadened to include “any person, group or alternative media source” that actively objects to, causes others to object to, supports and/or elicits support for anyone who engages in such travel disruptions at U.S. airports in response to the enhanced security procedures.
For individuals who engaged in such activity at screening points, it instructs TSA operations to obtain the identities of those individuals and other applicable information and submit the same electronically to the Homeland Environment Threat Analysis Division, the Extremism and Radicalization branch of the Office of Intelligence & Analysis (IA) division of the Department of Homeland Security. 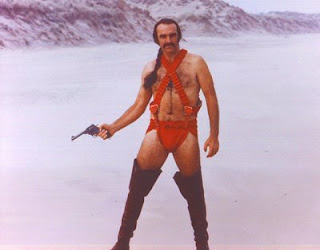 Gotta love the Facebook. Yesterday we see a few people posting and commenting about how hey, they'll opt for a pat down versus getting blown up, laDUH. Yes so actually these pat downs don't keep anyone safe. Actually the terrorists are on the payroll and the authorities generally manage to let them through to conduct the false flag terror operations which then justify all these humiliating procedures and so much more. These unfortunate terrorist incident lapses are generally "regrettable" and typically caused by "human error," and also by the terrorists always being so incredibly wily -- you have no idea, so everyone understands and it's such a bummer and some flunkie might get fired somewhere, but then we all agree (well not all of us) that unfortunately they need to ratchet up the security as a result and we move on, SAFER. Phew. But it would be unfriendly to call people ignorant on Facebook, your friendly social engineering laboratory, and at this point we think that anyone who is still so woefully confused at this late stage of the game can continue to be the government's monkey and knock yourself out. 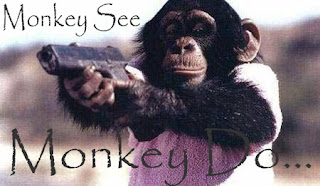 Some people like being the terrorists' monkeys, and some don't.
If you have some dignity, you probably are not going to like this game very much. But Janet Napolitano says the game is on, like it or not.

"I think we all understand the concerns Americans have," Napolitano said at the Trenton train station. "It's something new. Most Americans are not used to a real law enforcement pat-down like that. As we move forward, of course we will listen to concerns. Of course we will make adjustments or changes when called upon, but not changes or adjustments that will affect the basic operational capability that we need to have to make sure that air travel remains safe."

SOME PEOPLE are NOT YET USED to being treated like criminals! So they're going to fix that. And of course they will LISTEN to your concerns, and then they will pat you on the head (and then the breasts, and then the crotch), and tell you to be a good little monkey and do as you're told. And by the way you better drop the fucking attitude.

Now what's really funny about this, not funny haha but you know, "funny," is that Janet appeared with Frank Lautenberg, who chairs the Senate Homeland Security Appropriations Subcommittee.

Frank Lautenberg is a Jewish Democratic Senator from New Jersey. The Lautenberg Amendment made special provisions to allow Jewish and Evangelical refugees to resettle in the US from the former Soviet Union, because Congress declared these groups "persecuted." The refugees don't need to show actual persecution to avail themselves of the special privileges. For more background, see this link.
The Hebrew Immigrant Aid Society recently celebrated the 20th anniversary of the Lautenberg Amendment, celebrating the fact that over 440,000 "refugees" have resettled in the United States from the FSU and elsewhere as a result of this legislation, which Congress renews each year.
By 2000, the "Russian" mafia had already been well established across the United States.
COINCIDENCE?

No. There are no coincidences. You can thank Frank Lautenberg for the "Russian" mafia spreading across this country for a couple of decades, which law enforcement dared not touch because of course, the "Russian" mafia is mostly Jewish. So it was a hot potato.

In the Homeland, criminals don't get touched. Only monkeys get touched.
Posted by A. Peasant at 7:59 AM

It's instructive to see that the ruling class exempt themselves from procedures designed to humiliate their inferiors, and that the tax-paying sheep are subordinated to the tax-consuming sheepdogs. You're starting to see now who owns and manages this tax-farm. That's even before anyone starts to think about the price of wool and mutton! All that equality, democracy and voting has produced results that the sheep still can't believe or understand.

I guess I shouldn't be surprised that the teevee narrative hasn't made even the simplest deductive advance, "if you don't approve then don't fly?" Drive, take the train or just stay home has not even been suggested during this homey holiday. As Confucius is credited with saying, "where ever you go, there you are."

Never underestimate the conformity of large groups of trained monkeys.

Odin and Ian Welsh are on the same vibe here as well:

"If important people don’t have skin in the game, things don’t get fixed and the quality of whatever experience they don’t experience doesn’t get better. Everyone, most especially the rich and powerful, must fly on the same planes, must be subject to the draft, must have their kids go to the same schools and so on. Only then will the general quality be high."

Odin, so true. there super rich have made themselves all but invisible. you will never see them in a store, on a plane, in a waiting room, etc. they live in a parallel universe.

Aan, yes why should Chertoff get all the glory? that's what i think.

Malc, ha good link to Ian Welsh. many good comments there too. though that last link looks like satire. or maybe not. it's so hard to tell these days.

Deeper and deeper into the rat's nest.
I just love your writing - a jewel in the darkness. thank you so much.

thank you :D, and feel free to jump in anytime Jane. this is a great blogging neighborhood. someday we'll be celebrating victory over these madmen.

What an ending!
Love it!

AP, we ain't going to be celebrating any damn thing if you're going to be badmouthing my number one fashion god, Zardoz. Look at that thing mate, it's timeless! Coco Chanel eat your heart out.

I'll have you know I dress like that every day regardless of whether minimum wage retards are clutching my gonads or not.

And remember: if we can't dress in glorified red nappies with thigh-high kinky boots, the terrorists have won.

well we ARE going to have a party and you will be the life of it i'm sure my dear nobs.

Leadership 101 for the demented DHS leadership: don't ask people to do things you are not willing to do yourself. You are entrenching the dissociative behavior between yourselves and those you wish to lead. Are you that stoopid or just that cocky?