nothing changed yet... maybe tomorrow 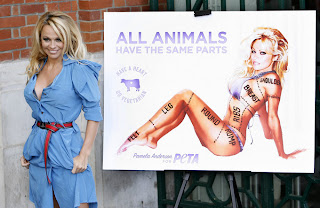 34 US warships to guard Obama in India

NEW DELHI: The White House will, of course, stay in Washington but the heart of the famous building will move to India when President Barack Obama lands in Mumbai on Saturday.
Communications set-up, nuclear button, a fleet of limousines and majority of the White House staff will be in India accompanying the President on this three-day visit that will cover Mumbai and Delhi.

He will also be protected by a fleet of 34 warships, including an aircraft carrier, which will patrol the sea lanes off the Mumbai coast during his two-day stay there beginning Saturday. The measure has been taken as Mumbai attack in 2008 took place from the sea.

Arrangements have been put in place for emergency evacuation, if needed.

Obama is expected to fly by a helicopter -- Marine One -- from the city airport to the Indian Navy's helibase INS Shikra at Colaba in south Mumbai.

From there, he will drive down in Lincoln Continental -- the Presidential limousine -- to the nearby the Taj Hotel.


Two jets, armed with advanced communication and security systems, and a fleet of over 40 cars will be part of Obama's convoy.
Around 800 rooms have been booked for the President and his entourage in Taj Hotel and Hyatt.
The President will have a security ring of American elite Secret Service, which are tasked to guard the President, along with National Security Guards (NSG) and personnel from central paramilitary forces and local police in Mumbai and Delhi.

Similar arrangements will be in place in Delhi, with the Air Force One to be kept in all readiness throughout Obama's stay here from Sunday afternoon to Tuesday morning.

Maurya Hotel, where the President will stay, has already been swarmed by American security personnel and protective measures have been put in place.


Security drills are already been carried out at the hotel as well as Rajghat which he will visit.


MANILA, Philippines – Ten foreign nationals who are suspected members of a terror group are now in the Philippines, an intelligence expert warned Thursday.
The 10 are reportedly meeting with leaders of the Abu Sayyaf Group (ASG) and other militant groups in the country, said Professor Rommel Banlaoi of the Philippine Institute for Peace, Violence, and Terrorism.
Banlaoi, however, could not confirm if the arrival of the said foreign nationals has something to do with the new threat of terrorism not only in the Philippines but in other countries, particularly the United States.
Philippine National Police (PNP) spokesman Senior Superintendent Agrimero Cruz, meanwhile, said police have not recorded the entry of foreign terrorists in the country.
“As per our intelligence reports, there are no foreign terrorists in the country; no movements in local terror groups, either,” he said.
Former PNP intelligence chief retired Chief Superintendent Rodolfo “Boogie” Mendoza Jr., on the other hand, confirmed reports that terrorists are planning to attack vital government installations and tourist areas in Metro Manila and other places in the country.
Citing reports coming from independent sources, Mendoza said the terrorism threat is real, and that police discovered it as early as last year. [The same police who now say they have no records of foreign terrorists entering the country? - ed.]

Mendoza said that as far as he knows, the terrorists’ plan to attack Manila was initially intended to be launched before the May 10 presidential elections.
The plan, however, was never executed.

It was only this week that the threat re-surfaced as confirmed by his sources from the Muslim community.
He added that the group out to sow terror is a composite team from the ASG, the Moro Islamic Liberation Front’s Special Operations Group, and Southeast Asian militant organization Jemaah Islamiyah.
The objective of the group is to make their presence felt so that they can unlock funds coming from international terrorists group, he revealed.
According to Mendoza this is the same group that was involved in the Rizal Day bombing of the Light Rail Transit in December 2000 and the Valentine's Day bombing in 2005.
The Armed Forces said they are not taking the threat for granted.
“We have been getting all sorts of reports such as this from various sectors about terrorist groups coming in,” said Brigadier General Jose Mabanta, Armed Forces spokesman.
“But at this time there is nothing certain about these reports. However, all of these will be considered and reports such as this should not be taken for granted.” -- from a report by Henry Omaga-Diaz, ABS-CBN News 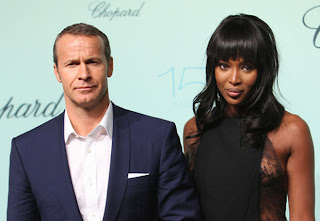 Naomi Campbell and Vladislav Doronin to get married in Egypt
^^^^^^^
The tunnel people of Las Vegas: How 1000 live in flooded labyrinth under Sin City's shimmering strip

Deep beneath Vegas’s glittering lights lies a sinister labyrinth inhabited by poisonous spiders and a man nicknamed The Troll who wields an iron bar.

But astonishingly, the 200 miles of flood tunnels are also home to 1,000 people who eke out a living in the strip’s dark underbelly....

‘These are normal people of all ages who’ve lost their way, generally after a traumatic event,’ he said.

‘Many are war veterans suffering from post-traumatic stress.

‘It’s not known how many children are living there, as they’re kept out of sight, but I’ve seen evidence of them – toys and teddy bears.’ 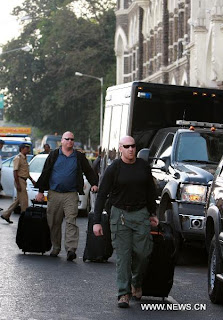 "American security forces for their President Barack Obama
arrive at the Taj hotel in Mumbai, India, Nov. 4, 2010.
U.S. President Obama will arrive
in India's financial capital of Mumbai on Nov. 6."
(Xinhua/Stringer)
Posted by A. Peasant at 8:00 PM

India... isn’t that where they lost the dozens of truck loads of explosives?

In regards to the mention of the aircraft carrier – what’s that all about? Why would 70 or 80 combat aircraft make the Kenyan any safer?

Here’s a horrible wee scenario. A single or multiple bombing attacks closes the ability to move around by limo/secure vehicle. El presidente takes to the helicopters with a known flight path – towards Air Force one. Even with 3 choppers that’s a piss poor option to take – eeney, meaney, miney, moe.

Warships and aircraft carriers would make zero difference in such a scenario. Who are they meant to impress or reassure. My advice would be to stay home.

It just gets more and more ridiculous everyday....

Hey Campo,...I spent a lot (A LOT) of time in the Philippines during the late 80's and most of the 90's. I was based in Davao City in Mindanao: I was very close to the MNLF and the Leadership of Region 10, the autonomous region of Mindanao, I almost married the daughter of Luis Theodorus Santos the infamous Governor of Mindanao and former Huk Huk rebel.

You will notice I use the letters M.N.L.F – Moro National Liberation Front. The Muslim community was never easy with the term ‘Moro’ as it was a derogatory term used to describe the local Muslim communities, coined by the Spanish when they ruled the place with an iron catholic fist.

I put it to you that the ‘M.I.L.F’ acronym is a pro-zionist construct like ‘islamist’ created to egregiously bias the usage of a generic term and to fit with the ‘whore on terror’ agenda: the MNLF were not ‘islamists’, they were struggling to be recognised as communities within the greater Philippine social framework and were often blamed for the crimes of zio-backed NPA (National People's Army), a pseudo communist, military and political organisation that were responsible for not much more than vice and assassinations convenient for front-page waffle published by TPTB.

The Moro that I knew were entirely defensive; the Manilla based political muppets sponsored by zio-cons created and sustained the conditions that caused the longevity of the conflict. It was and is about human rights and free and fair elections and unhindered political representation.

As for obongo, IMHO; he has reached his useby date.

Hullo AP, Guess what? I'm in Bombay! Obama, who's a crazy fool for scrabble, gave me a call because he needs a proper scrabble fiend on his side when he plays Michelle.

Don't worry about the aircraft carrier. I insisted on it. There's no way I was going to India without an entire squadron of F-18's to bomb the shit of whomever takes my fancy.

Otherwise the food is brilliant and I'm having a lovely time. Last night I laid down all seven letters, including a Q, on a triple word score! And the word was 'alqaeda', ha! Barry was rapt! Anyway gotta go. I have to slurp some palak paneer out of some brown-skinned lovely's navel.

ha, you guys bring the smiles to the insanity, i have to say...

nobs you wacky pirate. be careful now i hear michelle is a crazy bitch.

V, i'm sure that's true. i have written many times about the philippines. you can go to the wordpress version of twelfth bough and there's a category with hopefully all of it there. as per the usual they would infiltrate any and all proper opposition groups, and or otherwise blame their murders on them, just like Lugo their tool does with the EPP in Paraguay. same shit different country.

Obama will launch a US-Indonesia comprehensive partnership, which is designed to deepen cooperation on political, security and economic issues.

deepened cooperation with the US never seems to work out well for the other country....