UPDATED: Masked police raid on Alexander Lebedev's Moscow bank, via There Are No Sunglasses


A bank controlled by the owner of three British newspapers was raided by armed Russian masked police yesterday in a show of strength against one of Vladimir Putin’s most visible critics. ...Mr Lebedev is a key financial backer – alongside former Soviet leader Mikhail Gorbachev – of another investigative newspaper which is regularly critical of the Kremlin.

If Gorbachev is pitted against Putin, we pick Putin.


We find Vladimir Putin absolutely fascinating. Berlusconi, not so much.

There are several facets to the relationship.

Allegedly, Putin has an illegitimate son born in December 2009 with Alina Kabaeva.

Kabaeva has been identified as Putin's girlfriend ever since she retired from competition in 2006 after winning two Olympic medals and 18 World Championship medals to become the most decorated gymnast in history. Two years ago, the brunette was elected to the Duma, the Russian parliament, as a candidate of Putin's political party. Last year, when newspaper Moskovsky Korrespondent reported the rumor that Putin, 57, was divorcing his wife, Ludmila -- the mother of his two daughters -- to marry Alina, the paper was quickly shut down by its owner, Alexander Lebedev, who later bought London's Evening Standard. The 5-foot-4 Kabaeva -- who is half-Muslim through her Tatar father -- was born in Tashkent, the capital of Uzbekistan, when it was still part of the Soviet Union.

Now, don't go calling Spitzer on Putin yet. Big V has lost zero political ground and has consistently denied the allegations as rumors. He even good-naturedly joshed about it with reporters in Italy. And then he good-naturedly closed down the tabloid that reported it and they good-naturedly fired their editor. (This connection of course has been widely disputed by Russian officials and the papers' editors.)

At the least we can say that the whole affair it is REMINISCENT of Berlusconi's "do you want to be a showgirl or a politician sweetie?" handling.

And when Putin was asked about the affair in 2008, while he was visiting Berlusconi, Putin handled it like this:

While Putin's denial was categorical -- "Not a single word of truth" -- he proceeded to embark on a gushing paean to the fairer sex. "In other publications of the same type, the names of other successful, beautiful young women from Russia are mentioned," Putin began. "I think it won't be unexpected if I say that I like them all -- just as I like all Russian women." Russian women, he declared, are "the most talented and beautiful" in the world. "If anyone can compete, it may be only Italian women," Putin said. At that, Berlusconi laughed and raised his eyebrows in approval. The reporters cheered and applauded. The Italian premier-elect, who triumphed in elections this week, has long been a friend and political ally of Putin -- and he was quick to show his loyalty. He mockingly pretended to mow down the offending reporter with a machine gun, then jokingly proposed swapping the Russian press with the Italian press.

The whole womanizing thing seems out of character for Putin, who has maintained extremely tight control over public access to his family, in particular his two daughters. More on that later. However, we know things are seldom as they seem.


2. Litvinenko
In March 2010 The Guardian reported on the serious problems experienced by Alexander Litvinenko's family in Italy. They left Russia and tried to rebuild their life in Senigallia. After two years, their restaurant was raided and closed down, and the family has been reduced to handouts for survival.

Walter Litvinenko, Alexander's father, blames his family's problems in Italy on the relationship between Berlusconi and Putin.


"We have fallen victim to a political game," Litvinenko said today, speaking from the cramped flat he shares with eight relatives. "Berlusconi is no better than Putin. All European governments have been flirting with Putin. Berlusconi's dependence on him, and on Russian gas, means that we don't get asylum."

...The family say they do not know if the harassment has been authorised at the highest levels. "I thought Europe had 100% rule of law. We discovered in Italy this isn't true. It's connections and the mafia. It's as if we never arrived in Europe but ended up in some Russian province," Tatiana says.

...Walter Litvinenko blames Putin for the family's misfortune. "He killed my son. He's a sick man," he says. Tatiana, however, refuses to criticise Putin and focuses on Berezovsky. "My brother defended him. But he's clearly not interested in us." She admits, however, that she has not asked Berezovsky for anything.

It is not clear whether Berlusconi was protecting Putin or Berezovsky.

The author adds more information on the relationship between Putin and Berlusconi:

Silvio Berlusconi is Vladimir Putin's most ardent friend in Europe, and sees himself as the man to explain the Russian to an often perplexed west.

Their close association goes back to Berlusconi"s second stint as prime minister, in 2001-06. In April 2008 Berlusconi hosted Putin at his luxurious Sardinian villa, with Berlusconi visiting Putin's residence near St Petersburg last year. Putin also phoned Berlusconi in his hospital bed after he was attacked and lost several teeth last year.

Soon after his release from hospital in December, after being attacked in the street by a disgruntled voter wielding a replica gothic cathedral, Berlusconi appeared sporting a Russian Federation navy jacket. The sweatshirt with its double-headed Russian eagle logo was a gift from Putin.

Ultimately, of course, the relationship is about business. Thirty per cent of Italy's oil and gas imports already come from Russia and commercial ties between the countries have almost tripled since 2000.

Others countries have joined the project, including Austria, Bulgaria, Croatia, Greece, Hungary, Serbia and Slovenia. All these countries signed agreements with Russia.

On November 1, 2010 a French company signed an agreement with Gazprom.

South Stream is a rival to Nabucco.

South Stream is considered a rival of the US and EU-backed Nabucco project, aimed at reducing Europe's reliance on Russian gas supplies. The planned 3,300km pipeline, which will run from Turkey to Austria via Bulgaria, Romania and Hungary -- bypassing Russia -- is designed to carry 31 billion cubic metres of natural gas from the Caspian region and the Middle East to Europe annually. The long-delayed project got a boost last month when three key international financial institutions agreed to start due diligence on loans totalling up to 4 billion euros.

Moscow has meanwhile been trying to boost South Stream's standing by getting more companies from key EU nations involved. Earlier this month, Russian Prime Minister Vladimir Putin and his Italian counterpart, Silvio Berlusconi, agreed to allow Wintershall, which is part of Germany's BASF, to join the project. About six months earlier came word that the French power company EDF would become a South Stream shareholder.

We have learned some other things about Putin.

Asked how his wife, who is said to have cried when he assumed office, reacted to news that he would stay in politics, Putin answered tersely, “She was not overjoyed.”  (Putin denies marriage plans with ex-gymnast, April 18, 2008) 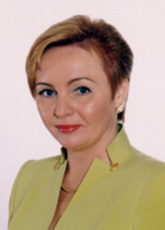 A hard man to be married to....? We think yes. Lyudmila has a kind face.


But while Putin is a tough husband, his wife conceded that he is an ideal father for their two daughters, 17-year-old Masha and 16-year-old Katya. They have spent "the happiest moments of their lives with their father," who "will allow them anything," in a sharp contrast to the way he handles his wife, Lyudmila Putin said. 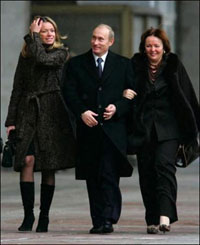 A photograph of one of Vladimir Putin’s grown-up daughters, Maria Putin (born 1985) appeared on the Russian internet. The picture was originally taken by the owner of an online diary known as Idiot.

We would like to remind here that the private life of the former President of Russia and his family is a tabooed subject for public discussions and publications in this country.
No one knows Putin’s daughters by sight. They never go out without their bodyguards. Russia and the rest of the world have seen Maria and Ekaterina (1986) Putin only once – their photos appeared in a small book about their father. The pictures in the book, which was released several years ago, showed two blonde girls with bowknots on their heads. Outwardly, the girls look aged 5 or 6 years old.
They appeared in public for the first time in the summer of 2004, when they took exams at the State University of St. Petersburg. All professors of the university were told not to say a word about Putin’s daughters in public.
Neither Maria nor Ekaterina appeared at the university ever since. The International Herald Tribune wrote once that Maria Putin got married on the Greek island of Santorini on June 11, 2005. The wedding ceremony supposedly took place at an Orthodox cathedral there.
Putin’s younger daughter, Ekaterina, resides in Munich, Germany, according to independent Russian scientist of politics, Stanislav Belkovsky.

The younger daughter, Katya, dates a Korean who works for Samsung Electronics. News is scarce but available.

The older daughter got married in 2005 on the Greek island Santorini. Who did she marry? We have no idea. Evidently it's a STATE SECRET.

He could be Russian.

He could be Dutch.

He could be the tycoon son of an oligarch.

What else would justify such secrecy?

Perhaps Putin and Berlusconi share a special relationship with oligarchs and organized crime bosses.
Posted by A. Peasant at 8:51 PM

Hey Campo,...Who cares? They are ALL over privileged schmucks of the yiddish CONTROL elite! Off with their heads!

A most useful post. It would be interesting if Putin and Berlusconi turned out to have a common interest in boys, and a bisexual lifestyle. Reportedly, Litvinenko "went public with allegations that Mr. Putin was having sex with men". http://transcripts.cnn.com/TRANSCRIPTS/0612/05/pzn.01.html

I doubt that very seriously that Putin is switch hitting, more like the reason Litvinenko had a mishap. That is one good looking tennis player though I have to admit.

Putin initially saved Russia from total rape by the oligarchs and there is no getting around it. If he was so in with the insiders they could have finished Russia long ago. He is a nationaliist and it is plain to see that.

What he is up to now is anybody's guess though.

Veritas, i sort of agree. but on the other hand we have many of us been hoping for something good from Putin, so this goes to the question of character. what is this guy all about?

no i hadn't seen that one dubs. and here's another story about lebedev:

he actually sounds decent (for an oligarch!)

i'm not trying to trash Putin. i like him. i just think we need to be careful and apply the critical faculties -- no exceptions. not even for Vlad.