In "41 guards arrested over prison break in Nuevo Laredo, Mexico" we learn: 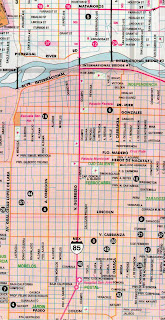 Dozens of the fusion centers were created after 9/11 to identify potential threats and “improve the way information is shared”. The centers use law enforcement analysts and sophisticated computer systems to compile, or fuse, disparate tips and clues and pass along the refined information to other agencies.

The centers have received billions in funding from the Department of Homeland Security and also work in conjunction with the military arm of the DHS, NORTHCOM.
They also have subscriptions to private information-broker services that keep records about Americans’ locations, employment history, financial holdings, associates, relatives, firearms licenses and the like. Some of these data-brokers, such as one in Maryland called Entersect, claim to hold records about 98 percent of Americans.

Problem: 151 escaped inmates just over the border.... Solution: amazing & sophisticated database funded with billions of dollars from DHS with access to records of 98% of Americans...?
Was this not the point of setting up all these elaborate databases? Wasn't that the point? To catch bad guys?
NO. The point, apparently, is to spy on Americans. These criminals are not Americans. The fact that they escaped just over the border is probably beside the point. The fact that they may be associated with drug lords -- also probably beside the point. These regrettable details make the war on terror go forth and multiply.
Win win win.
And it's regrettable for sure, since the authorities have a lot of data on Americans,

In Maryland, authorities rely on a little-known data broker called Entersect, which claims it maintains 12 billion records about 98 percent of Americans.
In its online promotional material, Entersect calls itself "the silent partner to municipal, county, state, and federal justice agencies who access our databases every day to locate subjects, develop background information, secure information from a cellular or unlisted number, and much more."
Police officials said fusion center analysts are trained to use the information responsibly, legally and only on authorized criminal and counterterrorism cases. They stressed the importance of secret and public data in rooting out obscure threats.

What a lucky contract. Do you ever wonder about these quiet little companies that no one has ever heard of, and yet they have these amazing contracts with the federal government? The not-Raytheons?

Entersect is headquartered in Santa Ana, California and is a subsidiary of Certifion Corporation, which is, in turn, a wholly-owned subsidiary of LocatePlus Holdings Corporation. LocatePlus' other subsidiaries are LocatePlus Corp., Dataphant, Inc. (which acquired Voice Power Technology, Inc.), and Metrigenics, Inc., a biometrics firm.

Looks like LocatePlus has had some problems, however. It appears to be all straightened out now. New management has been installed.

November 11, 2010: Former LocatePlus execs charged with securities fraud "Two former high-ranking executives of North Shore technology company LocatePlus Holdings Corp. were charged Wednesday with securities fraud and other allegations including using the identity of a man who drowned in Marblehead Harbor in 1985 to bolster their business. Jon Latorella, 47, of Marblehead, and James Fields, 43, of Brookline, were charged in connection with their alleged operation of LocatePlus of Beverly."

..."Barry S. Pollack, a Sullivan & Worcester lawyer representing Fields, issued a statement questioning aspects of the government’s handling of the case. “A thorough exploration into the unusual delays in the investigation and relationships between LocatePlus and the government is expected to paint a far different picture than what appears in the new claims,” he said in the statement."

..."The indictment was announced by Ortiz; William Offord, Special Agent in Charge of the Internal Revenue Service’s Criminal Investigation in Boston; and Richard DesLauriers, Special Agent in Charge of the Federal Bureau of Investigation — Boston Field Division. The case is being prosecuted by Assistant U.S. Attorney Andrew E. Lelling. In January, LocatePlus agreed to swap 72,000 shares of Series A preferred stock in LocatePlus in exchange for the $1.8 million in debt held by Dutchess Private Equities Fund Ltd. Founded in 1996 as Worldwide Information Inc., LocatePlus changed its name in 1999." (http://www.masshightech.com/stories/2010/11/08/daily37-Former-LocatePlus-execs-charged-with-securities-fraud.html)

We find it interesting that the SEC decides to go after some people but not others.


You never can tell who the authorities will decide is a threat. Sometimes the most obvious things escape them, and they go after innocent people guns a-blazing.

Must be that Human Error again.

must be that human error, again!?
dammit, dumb humans.
Can't ever do anything right, or so goes the excuse making?

But, what is amazing in all these failures to do their jobs?
In all these cases of human error??

No one, save for some odd guy or gal, tossed to the wolves looses their jobs for failing to do it.

9/11- who lost their job?
the banking scandal?
I think I recall putting up on the blog two,two- low on the totem, workers bear stearns workers went down for something..
How about the fraudulent bundled mortgage investments?
Who is being held responsible for that fiasco that resulted in the global mess everyone is in.

sorry for the rudeness AP.

This excuse of human error just gets to me!

certainly no need to apologize Pen. you're absolutely right on all counts.

Thats odd there were 41 prison guards burnt to death in a bus in the Israeli forest fires the other week.

responsibly, legally and only on authorized criminal and counterterrorism cases

Of course in hindsight Bradley Manning would benefit if there were some kind of actual controls on all these secret databases. That way a case could be made against him and he could be charged with a crime. You know, things like access logs, security groups, system logs, auditors and all the other shit required by every corporate computer environment on the planet.

Instead he is indefinitely detained as his body and mind turn to jello. Just another case of collateral damage. Was it teh gay that got him popped?

Human error was behind the Wars of the Roses, I suppose.

Hey Campo,...Human error was behind the geographical embarrassments of the Dardenelles Campaign in 1915: 60 thousand BEF (British Expeditionary force) Soldiers thrown onto a beach 20 feet wide at the base of 70 degree cliffs 6 miles from their planned landing point; all under the gaze of Turkish machine-gunners and within their sweeping arcs of fire. That damn human error will get your arse every time. Of course the guy that master-minded this plan; 1st Lord of the Admiralty Sir Winston Churchill (yiddish mum) never apologised for the human error as his plan was erroneously implemented. Not his fault, go figure. No weapons of mass destruction in Iraq; human error I guess, we'll never know, no-one in the msm seems to mention WMDs anymore.

Still, with so much dough thrown at these essential services, I mean really, I think we should be proud patriots and give up our liberties for freedom. Seems, it's the only way we can smoke out these el kay-duh types and win this 'wor on tee-ror'. Yup. Ya'll kan burg ma phoon-larns, I aint got nuthin' t'hide, no sur-ee-baab, yuk: Them el kay-duhs is lark neegers anyhoo.

i see everyone here gets it. when does our team take over?