You may have heard of Jesus of Nazareth, also known as Jesus Christ or simply Jesus. Tonight billions of people in the world celebrate his birth. Jesus grew up in Nazareth.

"And he came and dwelt in a city called Nazareth: that it might be fulfilled which was spoken by the prophets, He shall be called a Nazarene."  (Matthew 2:23, KJV)

Jesus made Nazareth his permanent residence up to the age of about thirty when he officially began his ministry.
The city of Nazareth is a small town, situated in Galilee, west of Capernaum, and not far from Cana.  It was built partly in a valley and partly on the slope of a hill.  Populated by mostly Gentiles, the city of Nazareth is not mentioned in the Old Testament.  Nazareth was considered of little significance, with a special contempt seemingly placed upon it:

The best explanation of the origin of the city name Nazareth appears to be that which traces it to the word translated Branch, (Hebrew: netzer) in Isaiah 11:1, meaning a small twig, sprout, or sucker, which Isaiah says will come forth from the stem (or stump) of Jesse - a reference to Jesus:

Today we read about tensions in the city of Nazareth.


Menorah Against Xmas Tree
Christian and Jewish tensions have intensified in Nazareth, with Christians demanding to have a tree displayed outside the municipality building, and the Jewish population vehemently opposing the move.
By David Yisraeli, Chabad Info
17 Tevet 5771 (24.12.2010)

Tensions between Christians and Jews in Nazareth have become very heated when the mayor of the northern city, Shimon Gaspo stated, "As long as I'm in office, there will be no Xmas tree placed outside a government office, or any other non-Jewish mascot."

The mayor also said he doesn't see why the city's 15% of Arabs, most of whom are Christians, should transform the city. Since his election, Gaspo has indiscreetly sought to Judaize the city.

He has also encouraged Jewish resettlement from other places to his city, causing the slight decrease of 1.2% in the city's Arab population.

Gaspo's administration has decorated the city with illuminated Stars of David, Israeli flags, and on Chanukah erected a large public Menorah outside the municipality building. These public Menorahs have apparently triggered off Christian leaders to demand the displaying of trees to celebrate Xmas.

Gaspo refuses adamantly. "Nazareth Illit is a Jewish city and all her symbols are Jewish," he said angrily. The Arab neighborhoods are full of the season's decoration, but there's no need to transform the entire Jewish city into an Arab (Christian) one."

The city's chief Rabbi Yeshaya Hertzel also expressed opposition to the initiative, arguing, "Nazareth Illit is a Jewish city, and we are in Israel, the Jewish land. The have their neighborhoods and are free to decorate them as they wish. But in the rest of the city, no way. The Menorah and other Jewish symbols are a natural thing in the Jewish city, the Xmas tree are a jarring sight to the Jewish population. 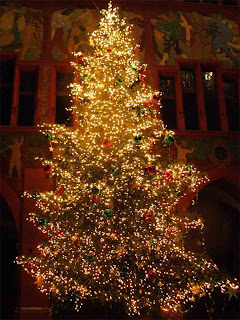 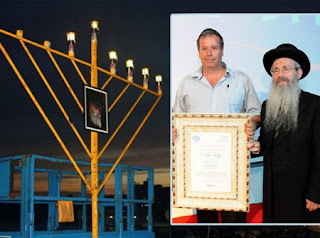 Versus this beautiful menorah?
Caption reads: Rabbi Herzel with the Mayor, Mr. Gaspo Photo: Berel Scheiner
We find it grimly amusing that he would cite the 15% Arab Christian population in Nazareth as a reason why NOT to cater to the minority.
Why doesn't that same rule apply in the United States, where Jews comprise 2-3% of the population, and where the vast majority of the population consider themselves Christian?
Do we cater much to the tiny Jewish minority in the United States? Can anyone seriously deny it? And yet in Nazareth, the city where Jesus grew up, Christmas trees are not allowed outside any government office. 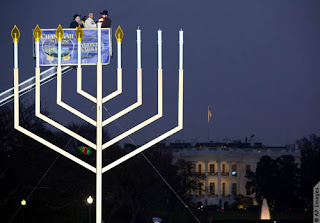 Chabad's giant menorah on the White House lawn.
We certainly hope the hypocrisy is coming into focus for Christians.
The truth is:
There are two distinct sets of rules.
One set proscribes what is expected of Christians.
The other set proscribes what is expected of Jews.
These two sets of rules are obviously not the same.
The Christian way and the Jewish way are not the same.
And they don't spring from the same source.
Scholars agree.
There is no Judeo-Christian tradition.

"Joshua Jehouda, a prominent French Jewish leader, observed in the late 1950s: "The current expression 'Judaeo-Christian' is an error which has altered the course of universal history by the confusion it has sown in men's minds, if by it one is meant to understand the Jewish origin of Christianity . . . If the term 'Judaeo-Christian' does point to a common origin, there is no doubt that it is a most dangerous idea. It is based on a 'contradictio in abjecto' which has set the path of history on the wrong track. It links in one breath two ideas which are completely irreconcileable, it seeks to demonstrate that there is no difference between day and night or hot and cold or black and white, and thus introduces a fatal element of confusion to a basis on which some, nevertheless, are endeavouring to construct a civilisation." (l'Antisemitisme Miroir du Monde pp. 135-6)."


Therefore God exalted him to the highest place
and gave him the name that is above every name,
that at the name of Jesus every knee should bow,
in heaven and on earth and under the earth,
and every tongue acknowledge that Jesus Christ is Lord,
to the glory of God the Father. 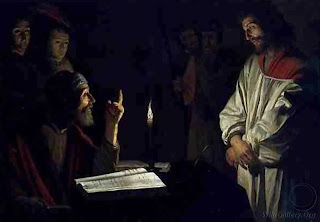 Christ before Caiaphas
You can believe anything you want.
You can follow whoever you want.
We all can.
That's the whole point.

thanks Aan. you are an inspiration.

Merry Christmas and Happy New Year to you also.

Hallo sister,
Thank you from your eyeopening articles.Sometimes its so hard to comprehend who the real enemies of
Christ are and that its all twisted and mixed up with lies and filth.Happy New Year.In Christ Matt aka ada

thank you for reading here deckard, and happy new year to you also.