please get the message 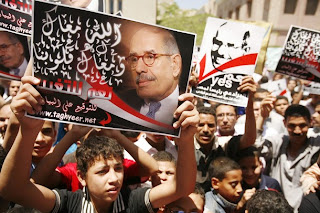 Who had the foresight to print up and distribute professional posters of El Baradei in all the chaos?
daylife.com

El Baradai is a globalist.

The MB is considered a "radical Muslim organization."

The MB has ties to the spooks.

The fear can now be raised that Egypt may fall into the hands of extremists.

This feeds directly into Israel's "fears." How convenient is that? Israel's "fears" will be justified. Israel can act in "self defense" to the slightest provocation.

"Our efforts are designed to continue and maintain stability and security in our region," Netanyahu said. "I remind you that the peace between Israel and Egypt has endured for over three decades, and our goal is to ensure that these relations continue."

...Egyptian troops on Sunday began to enter the resort town of Sharm El Sheik, according to Al Jazeera. The peace treaty signed between Israel and Egypt restricts the movement of Egyptian troops into the Sinai Peninsula, but Israel approved the entrance of troops, according to The New York Times.

Troops already moving into the Sinai?

What are Israel's alleged concerns?

"The greatest Israeli concern is that a change of regime in Egypt will bring instability in the short term and may cause the collapse of the Israeli-Egyptian peace treaty and even lead to another military conflict in the region."
"In an Iranian point of view the collapse of the Mubarak regime and the rise of the "Muslim Brothers" will be a strategic victory against the West and in their long-term political and military campaign against the Jewish State."

"The Iranians will take maximum advantage of the current situation and will urge Syria, Hezbollah and Hamas to fill the vacuum. Israel may find itself in its most difficult time since the 1948 independence war."

Israel wants a war. They want it so badly. These are all justifications for war.

Michel Chossudovsky has a message for the Egyptian people. Dictators do not dictate, they obey orders.


The slogans in Egypt are "Down with Mubarak, Down with the Regime". No anti-American posters have been reported... The overriding and destructive influence of the USA in Egypt and throughout the Middle East remains unheralded.

The foreign powers which operate behind the scenes are shielded from the protest movement.

No significant political change will occur unless the issue of foreign interference is meaningfully addressed by the protest movement.

Our message to the protest movement:

The relationship of "the dictator" to foreign interests must be addressed. Unseat the political puppets but do not forget to target the "real dictators".

The protest movement should focus on the real seat of political authority; it should target (in a peaceful, orderly and nonviolent fashion) the US embassy, the delegation of the European Union, the national missions of the IMF and the World Bank.
Meaningful political change can only be ensured if the neoliberal economic policy agenda is thrown out.


The cooptation of the leaders of major opposition parties and civil society organizations in anticipation of the collapse of an authoritarian puppet government is part of Washington's design, applied in different regions of the World.

The process of cooptation is implemented and financed by US based foundations including the National Endowment for Democracy (NED) and Freedom House (FH). Both FH and the NED have links to the US Congress. the Council on Foreign Relations (CFR), and the US business establishment. Both the NED and FH are known to have ties to the CIA.

The puppet masters support dissent against their own puppets?

These actions on the part of Freedom House and the National Endowment for Democracy, on behalf of the Bush and Obama administrations, ensure that the US funded civil society opposition will not direct their energies against the puppet masters behind the Mubarak regime, namely the US government.

These US funded civil society organizations act as a "Trojan Horse" which becomes embedded within the protest movement. They protect the interests of the puppet masters. They ensure that the grassroots protest movement will not address the broader issue of foreign interference in the affairs of sovereign states.

The Brotherhood, however, does not constitute a direct threat to Washington's economic and strategic interests in the region. Western intelligence agencies have a longstanding history of collaboration with the Brotherhood. Britain's support of the Brotherhood instrumented through the British Secret Service dates back to the 1940s. Starting in the 1950s, according to former intelligence official William Baer, "The CIA [funnelled] support to the Muslim Brotherhood because of “the Brotherhood’s commendable capability to overthrow Nasser.”1954-1970: CIA and the Muslim Brotherhood Ally to Oppose Egyptian President Nasser, These covert links to the CIA were maintained in the post-Nasser era. 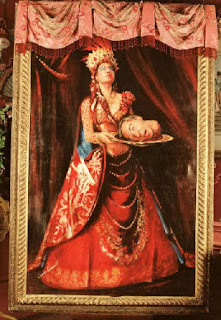 The globalists would like to have your heads on a plate.
source
Posted by A. Peasant at 4:31 PM

Driven by the same old murdering shysters, from behind the curtain, Peasant??

What a depressing thought.

Good reporting, as usual, on your part. Thanks.

it is my fervent hope that will happen one of these days.

"Every strike brings me closer to the next home run." Babe Ruth

Here is a shot of hundreds of Egyptian police running from protesters.

awesome links Peter!! especially #1. that deserves it's own post. thank you.

We mere humans see the chaos and offer a prayer to the success of the uprising in the hope that there is the possible spark of freedom out there for us all. Historically the hopes and desires of everyday folk get fed through the bender and the product recycled and fed back to the survivors. I sincerely hope that the chain is misery gets broken this time.

There is still a lot more of the drama to go. The media are feeding us the approved script but Peter’s links and others show a different reality on the ground. I am hopeful that the best laid plans of spooks and vampires can still go awry.

While we can interpret the seemingly clumsy efforts of the US to play both ends against the middle as cack-handed and unproductive – we would be wrong. You correctly point out the smudged fingerprints of the spooks. A developing crescent of turmoil and instability seems likely to sweep the Middle East.

‘Out with the old boss meet the new boss’ is the open strategy on display. I see the spread of instability as the key to the moment. The times of civil unrest are when the power elites can make the greatest changes in their favour. Instability is the key.

A century ago the British Empire tore up the entire map of the Middle East and redrew the lines. They created the artificial entities we now know in the region. Those lines no longer suit their purposes. I feel that process is about to begin again and we know what lengths they will go to further their ends.

Israhell has now called for Western support for Mubarak. They may as well have lined him up against a wall – so now we see how they want this to play out. The spooks have lit the match and I’m sure that they know exactly how they want the firebreaks to burn. It’s just us useless eaters between them and the prize.