everybody is not loving Raymond - updated

UPDATE: A13 has more on the latest arrest of Aaron Mark Dehaven aka Ahmed Haroon HERE.

A round up of the Raymond Davis jail situation... 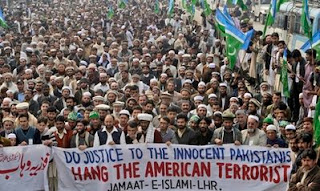 "FILE - In this Feb. 15, 2011 file photo, supporters of Pakistani religious party Jamat-e-Islami attend a rally against Raymond Allen Davis, a U.S. consulate employee suspected in a shooting, in Lahore, Pakistan. The Associated Press has learned that an American jailed in Pakistan after the fatal shooting of two armed men was secretly working for the CIA. The arrest last month of 36-year-old Raymond Allen Davis has caused an international diplomatic crisis. The U.S. has repeatedly asserted that Davis had diplomatic immunity and should have been released immediately. But former and current U.S. officials, who spoke on condition of anonymity because they weren't authorized to talk publicly about the incident, told the AP that Davis had been working as a CIA security contractor for the U.S. consulate in Lahore." (AP Photo/K.M. Chaudary, File) 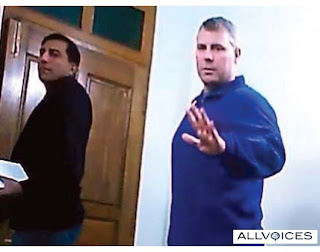 Raymond Davis, aka Michael George Fernandez?
Raymond Davis is being held in a Lahore jail called Kot Lakhpat. There is some concern that an operation might take place to "rescue" him.


ISLAMABAD: The Punjab government, fearing something fishy, will deploy multiple security cordons, including that of Rangers, in the Kot Lakhpat Jail to pre-empt a possible Hollywood Rambo-style sting operation by the US forces to get Raymond Davis released.
Punjab Police sources said that even otherwise the security of Davis had been tightened in view of serious security concerns that include some subversive act from India to get the double-murderer to embarrass Pakistan.
“In sheer frustration, the Americans are capable of conducting a sting operation for which we are ensuring that all security measures are taken on our part,” a Punjab administration source said, adding that the security of Davis was being shaped up while keeping in mind all possibilities whether regarding an assault on him, a terrorist attack and even a strike by US commandos to get him forcibly released.
A Punjab government spokesman and secretary information, Mohyuddin Wani, when approached, confirmed that Davis would be taken to the Kot Lakhpat Jail where he would be placed in a special cell which is detached from the normal barracks but set up for high-profile and high-value prisoners.
“It is highly protected and fully secured,” Wani said, explaining that all possible security measures would be taken, including multiple security cordons for the protection of the double murderer. Wani said that Rangers would also be deployed in the outer cordon.

The trial and hearings are being conducted inside the jail for security purposes.


Reportedly, Davis has gone on a hunger strike and would like to be treated like a gentleman, not a prisoner.

According to media reports, US Citizen Raymond Davis went on a hunger strike in Kot Lakhpat prison after his legitimate demands according to him concerning food of its choice and removing cameras besides treating him like a gentlemen and not a prisoner were denied....On the other hand, Jail Administration were of a clear-cut stance that US Citizen Raymond Davis is a prisoner and not a VIP hence he will be treated like other prisoners.

We learn more about Raymond Davis.


Investigation report pertaining to American murderer Raymond Davis forwarded to high ups exposed his real identity as ‘Michael George Fernandez’. Owing the exclusive expertise in ‘intelligence operating system’, he was deputed in American CIA from M-5 Corps for the execution of secret mission. Previously, he served under the direct authority of CIA chief Leon Panetta.
Highly reliable sources disclosed Davis is an expert in articulating Pushto, Urdu, Punjabi, Persian, Hindko and Marathi, and this why he was deputed in Pakistan as CIA chief in December 2010. 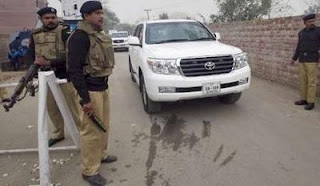 "Policeman stand guard as vehicles transporting U.S. Consul General Carmela A. Conroy and other consulate officials leave Kot Lakhpat jail after they attended the trial of Raymond Davis in Lahore February 25, 2011. A Pakistani court adjourned on Friday the trial of Davis, a CIA contractor charged with killing two Pakistanis until March 3, dismissing U.S. demands for his release. Davis shot dead two men in the eastern city of Lahore last month. He said he acted in self-defence and the United States says he has diplomatic immunity and should be repatriated." REUTERS/Mian Khursheed

LAHORE: US Consul General in Lahore, Carmella Conroy Friday visited Raymond Davis in Kot Lakhpat prison and remained with him for more than 4 hours, Geo News reported. According to sources, Conroy and Davis also had two one-on-one sessions. The US CG in Lahore arrived at Kot Lakhpat prison along with four other officials at 9:00 AM and initially had a two-hour meeting with Raymond Davis.

In a story published Tuesday, the English-language Express Tribune quoted a Punjab police official who said Davis was actually working with the Pakistani Taliban in a bid to stoke insecurity in Pakistan and support the argument that its cache of nuclear weapons isn't safe. Call records of Davis's cell phone allegedly establish his link to 27 Taliban militants and a sectarian group known as Lashkar-e-Jhangvi, the police source said.

What could possibly go wrong?

He is held in a separate part of the jail. Reportedly, the men guarding him have had their guns taken away for Raymond's safety, so they don't accidentally on purpose kill him, and his food is tested by dogs before he eats it. Well he's on a hunger strike now so that's not important.

But unarmed guards....in a separate facility from the rest of the jail.... where all the proceedings are being held and the US big shots come in and see the lay of the place and have one-on-one meetings with the prisoner, the alleged CIA chief....?

Again, what could possibly go wrong? Is it us, or does it seem like an engraved invitation to some Jessica Lynch Rescue Redux? Could they possibly arrange things to make it any easier for special forces to drop in there?

NEW YORK: The case of American official Raymond Davis, arrested for double murder in Lahore last month, could spark an Egypt-style revolution in Pakistan, cricketer-turned-politician Imran Khan has said...."This is not an ordinary situation," Khan told the Time. "If he (Davis) is returned to the US under diplomatic immunity, it might trigger the revolution off." ...However, Khan suggested that Pakistan was ripe for an uprising. "I think Pakistan is completely ready for it," he said, adding, "In fact, it's even more ready than Egypt was."

Well maybe that's the plan? Triggering more instability in Pakistan, as if the Pakistanis haven't had enough? Something to justify the dream of breaking Pakistan up and securing that international corridor out of Balochistan?

Any number of things could happen. We won't speculate.

Balochistan is falling apart. A motorcycle bomb exploded in Gwadar, a port city in Balochistan.

Pak arrests another US national, now on suspicion of espionage


According to sources, Aaron Mark Dehaven, locally known by the name of Ahmed Haroon was a US national from West Virginia illegally living in Peshawar, as his visa had expired on 23 October 2010....Well-placed sources told TOI that Dehaven had been living, for the past three years, in Peshawar's Falcon Colony, one of the most secured residential areas in the city. He had set up a private office in the country's volatile city and had hired several locals. ...Sources claimed that Dehaven was originally tasked to provide security to the visiting US officials to Peshawar. Intelligence officials have confiscated his vehicle, carrying Islamabad's number plate---QB 565 and two cell phones.

"The purpose of his visit was unclear but one security official, speaking on condition of anonymity, told AFP he had been working with private security agency Catalyst in Islamabad."  (Telegraph UK)


Back in March 2010, the "local Taliban," as opposed to the non-local Taliban composed of spooks and hired killers from assorted places, distributed a pamphlet describing the Pakistan Army as an impure force in bed with foreign intelligence agencies.


PESHAWAR: The Taliban on Friday responded to the military's allegations that the militants were being backed by India and Israel by distributing pamphlets that described the Pakistan Army as an "impure force" working at the behest of the CIA and FBI.

The local Taliban distributed the pamphlets at mosques after Friday prayers in Miranshah and other areas of the Waziristan tribal region, local residents said.

The pamphlets described the Pakistan Army as a "napak fouj" (impure force) that worked at the behest of the CIA and FBI.

They said the army derived its strength from the "terrorists" of private security contractor Blackwater, US drones, CIA, FBI, India's RAW intelligence agency and Israel's Mossad spy service. The pamphlets also said the Pakistan Army was funded by the US, NATO and the UN.

...On March 2, Pakistani planes had dropped pamphlets in North Waziristan that claimed India, Israel and al-Qaida were funding Taliban fighters in the region.


This all seems to be born out by the facts on the ground.

Hi A.P
we must be in tune today as i just posted this.
http://thirteenthmonkey.blogspot.com/2011/02/another-us-national-arrested-in.html

And I didn't notice you did this one, until i finished editing and posting.

it's all happening and just gets deeper and deeper.

we are aware of the Faal taint. we think that has become quite a useful tool for the spooks.

whatever the disinfo, it is a fact that Pakistan's nuclear capabilities are a "problem" for some people. therefore we expect they would be working on a "solution."

if Davis is as high up the food chain as CIA chief, he would presumably be involved in any "solutions," whatever they are.

A13, will make the rounds and check out what you've got.

Thanks for keeping us up to date.