Raymond causes a break up?

UPDATE: Moon over Alabama notes that: "So while there was an uninterrupted campaign of drone strikes on Pakistani ground every three days for several month, taking Mr. Davis off the street seems to have stopped it."

We see some bubbles percolating up from Mexico and South America, and we see the "revolutions" spreading around in the Middle East, but we want to take a look at this Raymond David case.

Penny was right on it.

Great links. This Raymond Davis makes David Coleman Headley look like he was playing dress up. 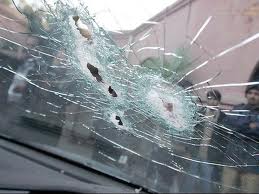 The tight pattern of bullet holes in the windshield shows the precision of Davis's shots at his victims.

What seems clear at this point is that Davis, 36, is not what the US government is now claiming he is: a “technical advisor” to the consulate. That geeky description is belied by the eight or more perfect shots that he put, rapid-fire, into the two motorcyclists, shooting through the front windshield of his car.
His record --10 years in US Special Forces, supposedly ending in 2003--and his shell “security” company in the US, with its faked addresses, suggest strongly that he is working for the US, either in some intelligence branch, or more likely as an employee of some mercenary-for-hire company like Xe (Blackwater). In fact, a former long-time Army Special Forces veteran familiar with black-ops, speculates that Davis may still be in the Special Forces. He says, "Consider the strong possibility of our man being active-duty military, not Agency, not contract. Military people from special units have more and more taken responsibility for covert ops, especially those that involve shooting."
This veteran adds, "Military folks are sometimes given an "official" cover, ie, a diplomatic
passport and some BS story about what they do (consular section, eg). This is a problem, because it violates agreements with the host nations about reporting how many military are in country, and covers some sensitive operations. Thus the panic of the Department of State et al right now."
What Davis was actually doing on his ill-fated drive into the commercial heart of Lahore when things went wrong is up for grabs.

He Hui Quan did an update on this story the other day. In particular, note all the the things found with Davis:

Pakistani media also have fanned speculation about the evidence discovered in Davis' car. Of which the police report state that items included an unlicensed Glock pistol, 75 bullets, a "survival kit," an infrared headlight, US and Pakistani currency, a digital camera, computer memory cards, a passport, a satellite cellphone, a box cutter and a portable telescope. On his person, Davis was found with Davis also carried multiple ATM and military ID cards and what was described as a facial disguise or makeup.

Well, this looks like one of those cases where we will see how the War on Terror is really constructed. Who the terrorists really are....

According to this article, found at There Are No Sunglasses, Islamabad has "concrete evidence" that Mr. Davis is linked to the Tehrik e Taliban e Pakistan (TTP), a group responsible for some of the terror attacks in Pakistan. Meaning, he's a, well, uh, he's reportedly an American Army Special Forces who works with the TTP, well shit what do you suppose that makes him?

The article is worth reading in full. It says, in brief, that:


"There is conjecture that Mr. “Davis” walked into a trap laid out by the ISI. In fact his contacts were actually ISI agents. All that he said and did is in the hands of the Pakistanis. Mr. “Davis” thought that by shooting the two operatives, he would eliminate the evidence against him. In fact, it made matters worse. Other operatives who were in the vicinity had already taken the necessary precautions. The ISI has leaked information to the media that Mr. “Davis” had crossed a “red line”."

"While the CIA, the State Department and the White House think that this is a new discovery–the Pakistanis point to a long trail of evidence that directly points to the US consultants and their hirelings in Afghanistan and Pakistan. The ISI and the Army believe that at the right time, the details of what the Pakistanis know will be revealed to President Obama and the world."

Those "consultants" and "hirelings" would be people that work for Xe and DynCorp, for instance. And, honestly, this is not news.

See: what has two thumbs and looks really really bad?


The US now wants to get this guy Davis out of Pakistan the same way they rushed to get David Coleman Headley into protective FBI custody.

In Pakistanis plan a break with the US, we read more about the mood in Islamabad. Reportedly, Davis was not liked in Pakistan and had been asked to leave, but got back in when Mr. Hussain Haqqani helped get those 500 visas approved in one day:

He was in an area which was a “No-Go” area. Already declared a Persona Non Grata (PNG) in Khyber Pakhtukhawa, the co-owner of Hyperion Consulting was not liked in Pakistan. After the PNG status he was supposed to have left Pakistan–and he did. However US Ambassador to Pakistan (aka Pakistani Ambassador to USA) Mr. Hussain Haqqani was instrumental in getting 500 visas approved in one day without the proper background checks. Mr. Davis apparently slipped back into Pakistan. The pictures in his possession reveal that he was photographing sensitive Pakistani targets.

The US Consulate’s role in this matter was very suspicious. Instead of assisting the local authorities, it engineered a fake story about the motor-cyclists being professional thieves. The fake robbery story did not fly with the government of Pakistan, because it knew the backgrounds of the agents who were following Mr. “Davis”. The intensity with which the US Consulate reacted, and the depth of the threats that emanated from Washington clearly informed the Pakistanis that something big was up–and this could not be ignored.

...The government will not be able to withstand tsunami in the aftermost [sic] of a clean release of Mr. “Raymond Davis”.

Therefore, the Pakistani government has a plan to weather the storm if the two countries "break up." Pakistan will reach out to other countries:

Beautifully written and peiced together AP.

You, Penny and HHQ are doing a "bang on " job with this "story".

Keep it up, THEY are loosing their mystique.

Hey Ap, thanks for the link back to my earlier post.

Quite an interesting tale, isn't it?

It helps to get the full pic on a story that just one of us can't keep hacking at.

hello girlfriends, thanks for the good words. i am finding it tough to stay on top of everything so did just want to ping this one before whatever else comes next. but Pen you were on it and thank goodness, and you nailed it first time around.

With all these revolutions going on in the Middle East, I can't help but be reminded of the "long play" one brewing here in the states. I'm referring to, of course, the Ron Paul Revolution.

Yesterday, Fox "news" interviewed RP about the "booing" going on when he was announced the winner of CPAC earlier in the week. Only problem was that the footage they aired and referred to was from CPAC 2010, when many Romney supporters were in attendance. Here's a link to some vids regarding this - http://www.dailypaul.com/157223/bustedfox-news-cpac-ron-paul-video-deception

But what occurred to me the other day was...with the "austerity" riots going on in Greece, the UK, and some other countries, people are protesting the cuts...but here in America, it appears many "enthusiastic supporters" are pushing for a man to be President (as unlikely as it may seem) who WANTS to do away with most of government functions. It just seems weird that that people are rioting AGAINST overseas, we're nearly rioting FOR over here.

Am I missing something? Just thought I'd throw it out there.

Hi A.P
Hot Damn yourself!!!
Back atcha baby!
Thanks for the rookie remark!
That makes it all worthwhile :)
OK.
On The Davis case:

In The Aussie papers was this story:

Pakistan court to hear US "Diplomat" claim.
Snippet below.

"The United States has postponed a round of high-level talks with Afghanistan and Pakistan following failed attempts to get Davis out, and US lawmakers have threatened to cut payments to Pakistan unless he is freed."

For full story check out.

I shall borrow some of this!

Davis (whose identity was first denied and later confirmed by the US Embassy in Islamabad), and the embassy have claimed that he was hired as an employee of a US security company called Hyperion Protective Consultants, LLC, which was said to be located at 5100 North Lane in Orlando, Florida. Business cards for Hyperion were found on Davis by arresting officers.

First, there is not and never has been any such company located at the 5100 North Lane address. It is only an empty storefront, with empty shelves along one wall and an empty counter on the opposite wall, with just a lone used Coke cup sitting on it. A leasing agency sign is on the window. ....

You can read the entire article in this website:
http://www.counterpunch.org/lindorff02082011.html