not on the table

A13 has some updates on the Ray Davis and Aaron Mark DeHaven situations in Pakistan.

The Peshawar court rejected DeHaven's bail application because he had no legal documents. He goes back to jail for 14 days.

Meanwhile, forty-five other people, culled from Davis's phone, have also been taken into custody.

No word yet on their identities. However, DeHaven's firm is reportedly staffed with retired US military and defense people.

Little was known about DeHaven except that his firm, which also has offices in Afghanistan and Dubai, is staffed by retired US military and defence personnel who boast of direct experience in the "global war on terror".

We often hear how "everything remains on the table." However, we see that one thing absolutely does not remain on the table.

There will be no trading Ray Davis for Aafia Siddiqui.

The sources said that Pakistan discussed the proposal at “the highest level” in the Obama administration but was told that this was “a non-starter”.
The US government informed Pakistan that they would not entertain the possibility of trading Ms Siddiqui for Mr Davis because “these were two different cases”.

That's correct. Ray Davis shot Pakistanis dead in the street in broad daylight. All sorts of evidence has been recovered from the scene, where he was arrested.

Aafia Siddiqui was kidnapped with her children on March 28, 2003.

Amongst the many outstanding questions regarding the case of Aafia Siddiqui are the following: 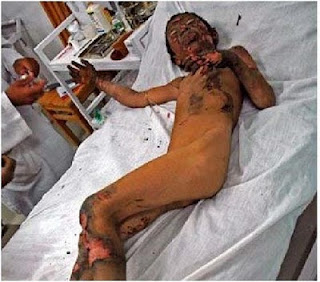 Victim of US drone attack.
We would like to put up some pictures of Judge Richard Berman and Assistant US Attorney Christopher La Vigne, but their faces have been scrubbed from google.
Judge Berman sent Aafia Siddiqui to the Federal Medical Facility in Carswell, Texas.


We would think Aafia the LAST PERSON ON EARTH that the US would want paraded around on teevee as the prisoner exchanged for the valuable "DIPLOMAT" Ray Davis.

They don't ever want her story told.

We thought maybe a dramatic rescue for Ray... ? Most likely they will entertain one of these other proposals.

Since his arrest both sides have discussed various proposals to break the impasse but have not yet succeeded in doing so.
1) The proposals include quashing a case against the ISI chief in a New York court and curtailing the CIA’s activities in Pakistan.
2) Another proposal calls for the US government to pay reparations to the victims’ families, who under a Pakistani law can pardon Mr Davis if asked.

Apparently, the US administration is discussing all three proposals with Pakistani officials.

ISI chief’s case: Meanwhile, a court in New York has accepted a petition against the ISI chief for his agency’s alleged involvement in the Mumbai terror attacks, which also killed some US citizens.

Diplomatic sources claim that the US administration appears willing to claim sovereign immunity for the ISI chief in this case provided Pakistan also granted diplomatic immunity to Mr Davis, who is a CIA contractor. “At one stage, the Americans were going to file papers in the court, stating that the ISI chief enjoyed sovereign immunity but decided not to do so after Mr Davis’s arrest,” an official source said.

The 26-page lawsuit was filed before a New York Court on November 19 against the ISI and LeT by the relatives Rabbi Gavriel Noah Holtzberg and his wife Rivka, who were both gunned down by militants at the Chhabad House in Mumbai.
Major Iqbal and Major Samir Ali are other ISI officers who have been issued summons.
The one of its kind lawsuit also brings as defendants Lashkar operatives like operations commander Lakhvi, JuD chief Saeed, and Azam Cheema.
"The Mumbai terrorist attack was planned, trained for and carried out by members of defendant, the LeT. Defendant ISI provided critical planning, material support, control and coordination of the attacks," the lawsuit alleges.
It accuses ISI officers Mr. Pasha, Mr. Taj, Maj. Iqbal and Major Ali of being purposefully engaged in the direct provision of material support or resources including weapons and explosives.

"On and prior to November 26, 2008, the ISI, Pasha, Taj, Iqbal and Ali (as well as other officials, agents and employees of the ISI) directed, engaged and/or relied upon the efforts of U.S.-based individuals, including but not limited to David Headley and Tahawwur Rana, for raising funds, building a network of connections, recruiting participants and planning the operation of the Mumbai terror attack," the lawsuit claims.

If we had to guess, we think that proposal will probably be the one that works out.
Posted by A. Peasant at 9:52 PM

I doubt Hillary and the Fem-empowerers would want the abuse of Aafia Siddiqui to get out, kind of differs from policy:

Read against Lara Logan's alleged abuse at the arms of a mob , in public .v. someone locked in a hole surrounded by people who chose to work in said hole, shows how orchestrated that event was [ 'orchestrated' in my opinion]

Natalie Portman is horrified by a drunken John Galliano. Wonder what she'd see if she saw the video of Mrs. Siddiqui's life at present.

Odd timing that one with Portman just winning an Oscar for a film about the abuse of young women called ballet, and her being in the news, and just happening to be chosen as the main opinion on Galliano, and speaking for the whole community an' all .......

Dr Aafia Siddiqui’s case is truly brutal. Her case is a testament to what the state can do to any individual anywhere in the world. It stands as a warning and threat to us all. You also ask a vital question – where are her children?

Taking a wild guess Chucky, I would say her children might be ready to donate an organ at this point or in some Israeli brothel.

Unfortunately all the reasoning in the world will not reach the "Glenn Beck tells it like it is" crowd. I am afraid the gullibility of the western public at this point is about as unnerving as the war crowd.

HI A.P
I am pretty distubed by the
Siddiqui swap and her whole situation actually, Yes, Where are her kids?? a true indictment on the foul beings that captured her, tried her and imprisioned her.
it makes me sick in the stomach that this can happen to a mother, in our supposedly civilized 21st Century.
Cheers A13

what's been done to this woman is nothing short of diabolical.