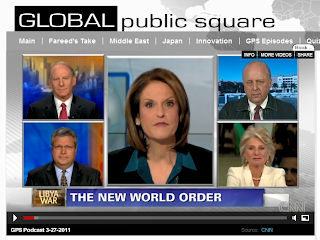 
The New World Order; What's Next for the Middle East?

GLORIA BORGER, GUEST HOST: This is GPS, THE GLOBAL PUBLIC SQUARE. Welcome to all of you in the United States and those joining us from around the world. I'm Gloria Borger. 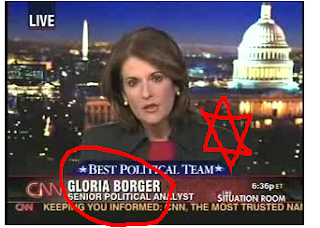 Fareed is off this week, but you'll see his conversation with Malcolm Gladwell later in the broadcast.

Meantime, the topic at hand today, Libya. Was action the right choice for coalition nations? What happens if a no-fly zone succeeds and Gadhafi stays in power? And who sets the mission for NATO?

Let's get straight to our panel. Richard Haass is the president of the Council on Foreign Relations. 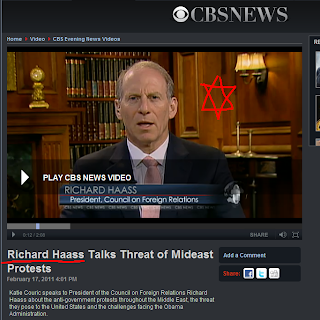 "Yesterday one of my many moles inside the Council on Foreign Relations sent me the 2008 annual report. Beautiful cover. Rocks my world. You flip the book open and you see Jewish names. You see Larry Summers and Robert Rubin, who were just on stage with Obama,  in a picture together, see Leslie Gelb's name, see Richard Haass, CFR President, who is Jewish." Mondoweiss: Let's Don't Be Naive (About Obama and the Jewish Establishment) 11/7/08

John Negroponte is the vice chairman of McLarty Associates and also the former U.S. ambassador to Iraq and former director of National Intelligence. 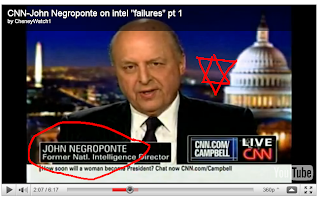 Mr. Negroponte is Greek-American diplomat. He is currently leading the diplomatic war against the people of Iraq as the U.S. envoy at the United Nations (UN) in New York. Negroponte is Jewish. A friend in Spain expressed his deep concern to me recently: " to appoint a Jew as ambassador to the Arab country that has been devastated because of the will of a cabal of Jewish neocons headed by Wolfowitz ­ Bush is just an accessory -, is like trying to put off a fire using buckets of gasoline". Counterpunch: Ghali Hassan: Who is John Negroponte, 6/4/04

Robert Kagan is a senior fellow with the Brookings Institution. 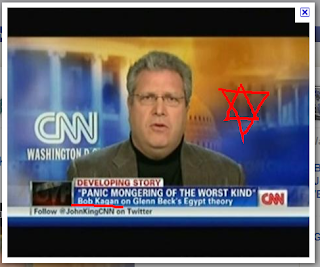 And Jane Harman is a former Democratic congresswoman from California who chaired the Subcommittee on Counterterrorism and Intelligence, and she is now the new president and CEO of the Woodrow Wilson Center. 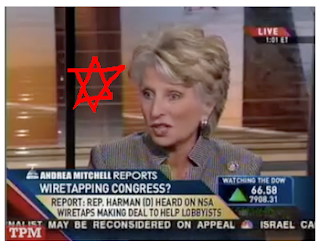 What if CNN had a panel of five prominent Muslims discussing US FOREIGN POLICY IN THE MIDDLE EAST? Would anyone notice? Would anyone have a problem with that, with the BIAS?
Posted by A. Peasant at 7:43 AM

Well, I didn't know Negroponte was jewish! Nobody tells me anything.

What if CNN had a panel of five prominent Muslims discussing US FOREIGN POLICY IN THE MIDDLE EAST? Would anyone notice? Would anyone have a problem with that, with the BIAS?

I think if these prominent jews can keep their biases to themselves for the good of everyone else, then I don't think anyone with the surname of 'al Saud' or 'bin Laden' would have any trouble either.

After all, they are all gentlemen, aren't they ; men of the world? (not sure about Gloria, though)

you can bet your bottom dollar that some people would have a great issue with 5 prominent muslims discussing middle east policy.

yet, one would think it would actually make more sense to have muslims discussing middle east policy, given the fact they make up the majority of the middle east population..

The principal reason the MSM has collapsing credibility.
The answer is to diversify the news.
Ends the issue

Don't worry about this nuclear thing either, I just saw a Kentucky fried chicken eater on youtube explaining you get more radiation in front of the TV than the what is falling on Michigan.

Sarko is leaving fro Japan soon with a bevy of French scientists (the ones who sold them MOX fuel) and discuss how they are going to fix this thing.

The good Dr. Tom Burnett over on Rense just gave pretty good run down on it. The plutonium and other debri will last 24,000 years. It will go into the ground water at Fuki, which is now most likely melting down and spread all around. With the plutonium meltdown you can't even encapsulate it like Chernobyl. It would be good to have some of that Chernobyl technology about now.

The bottom line is nobody will live in that area for hundreds of years, at least if they want to hang around long. Plutonium is indiscriminate.

U.S. plants by the way keep 40 times the spent fuel rods laying around that Japan had on hand. What if we have an earthquake? What if Cumbre Viejo goes?

So with deadly vapor easing all through the upper atmosphere why is the mideast top choice for conversation right now?

It looks like the demand for MOX fuel is about to hit an all time low. Japan will cash in their U.S. bonds and the financial collapse will come surely.

I am looking around the net and I see people complaining no animals or pets are being shipped out of the fuki area. Everybody thinks some knight in shining armor is going to show up and fix things. That is the kind of chicken little thinking that has brought the world to the brink. These people need to realize they need to hop a jet and go over there and save themselves. Everybody else there seems to be clearing out, especially the bankers.

dubs, i agree this is the major thing going on. that's why we don't hear about it. i'm sick over it.

otherwise, booger is not sending me emails when people comment, so pardon my delays in replying. i thought i had a big piece of spinach in my teeth or something....

I have regularly said that we should run a ‘spot the goy’ competition with the Yo’mama administration. Over here in CCTV land the efforts are buried far deeper in the woodwork.

The Zionista’s fill the senior positions and the factory moulded media type clones take their cue from think tank clones. It’s like one demented theatre of spin. Pantomime is very big over here. Look it up. That’s exactly what it’s like.

These Libyan rebels are damned smart and industrious in the office, not just the battlefield - they've created a new oil company and a new central bank all by themselves - clever lttle rebels: http://www.bloomberg.com/news/2011-03-21/libyan-rebel-council-sets-up-oil-company-to-replace-qaddafi-s.html

Also Goon Squad has a new post up after a long absence. It don't look kosher to me, but being late to enlightenment I'm not all that familiar with Greg's work.

c: "PS 5 Muslims discussing the Middle East on the same show – it’ll only happen in an episode of 24" -- they would be swarthy no doubt, and in a shadowed room...whispering furtively...

freethinker, i'll check that out thanks. also, just saw this about those rebels:

what are the odds?

heh, while it's routine for our screens to be dominated by these fifth-column creatures, it's something to see them laid out in one frame, Brady Bunch style, with the 'NWO' caption. Yikes.

i know. i watch about 20 minutes a day, just long enough to get through an interval training workout. (it pisses me off which gives me extra energy.) and i almost always watch CNN for that 20 minutes to see what they are on about. and this is what i tuned into. i about fell off the treadmill.

HI A.P.
They are accepted as what they are as no one seems to understand, or would want to come to the conclusion that there is a definate over representation of these chosen ones in positions of power, the media and most other areas where money, kudos and power are at stake...so brainwashed are the masses that they think the mooslims are the baddies and the jews are gods chosen and can't do no wrong and are our friends...how wrong they are and how dangerous is that headspace.
Cheers A13

They have abandonned work on the fukushima plant and are asking for help from foreign countries the radiation is so high. Uncle Sam to the rescue. The Russians might help them out as they have experience in burying reactors under lead and concrete. Only think Chernbyl wasn't a total meltdown and this one might melt the cement and lead also and keep going like the energizer bunny. They all say you don't want a MOX fuel reactor to get away from you.

I am afraid the plant there is going to be the story for several thousand years. A Japanese activist who wrote a book last year was surprised as he figured the plant south of Tokyo would be first to go. (Hamaoka) This is a little too much excitement for me.

Jews have so insidiously subverted every facet, and americans are so sheepish when it comes to being PC, so afraid of being ACCUSED of being Anti-Semitic. No one on this blog though!! It's truly sickening. with duel citizenship it's plaintivly alarming. I'd prefer to have five Muslims analyzing the Mid East - it would be saner, and without all that out of control histrionics and spittle. not to mention lies...

Perhaps it the 'Centre of Attention' gene [ or Centre of a tension].


I believe its called Chutzpah

yes. also if anyone wants to watch the video, notice the microexpressions, particularly the sneering. jane harman seems incapable of speaking without sneering, for instance. similar negroponte.

I thought your post was an excellent observation AP. Great timing.

I am learning very quickly...it IS rude to notice ;-)

Five, eh? On the Death Cult Love Fest drinking game that would equal ten shots!. The big vom here we come! Actually you don't really need the alcohol, those five scumbags are enough to make your gorge rise all by themselves.

Oh, and I mentioned it over at Pen's, but I'll mention it here too - Sabretache has some nice things about Libya over at his wikispooks site detailing the various who, what, and wheres in Libya. Admittedly the one about 'who are the Libyan freedom fighters' was a bit soft (still worth checking out though), but the other two are very good.

nobs! how are you man? good to see you around. that's a cool site be Sabretache, i'll check it out thanks. i would have probably missed it at Pen's being up to my ass in alligators here.

switters, hola! ha, i *knew* someone else must have been watching sunday morning.