Condi says, "You have to act on the intelligence that you have."

And in that short statement, she names the game. Condi LOVES some good hot intelligence, and she knows where to get it, and how to pimp it. And don't you be giving her any attitude about that intelligence. It's worth every drop of blood that other people shed to pay for it. 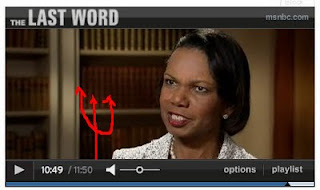 A Haughty Fucking Bitch, if we ever saw one. And we have seen a few.

Condi repeatedly references the intelligence. The intelligence is like this magic black box with heroes inside, heroes like Jack Bauer. And every administration trots out the findings of these intelligence people, and uses these findings to justify killing people. 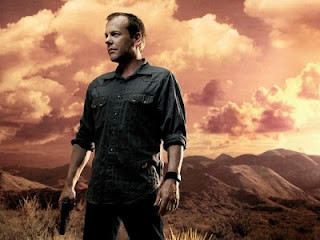 But REGRETTABLY, the intelligence turned out to be bad. But that is not Condi's fault. Nor does it seem to be the intelligence people's fault. They all did the best they could, see? Who could have imagined that the intelligence could be bad? So Condi and the Bush administration went ahead and ACTED on the (BAD) INTELLIGENCE provided, and then later, after millions of people have been killed maimed displaced or otherwise destroyed, she skips onto a teevee interview and ACTS like all that was perfectly ACCEPTABLE. Like YOU would have done the SAME EXACT THING.

Now Lawrence can't say this, because he gets paid the big bucks on teevee, but we can. The problem is that the facts are manipulated, the history is manipulated, and the intelligence is manipulated. Thus the entire threat assessment is bogus, and the actions -- meaning the destruction of several countries -- was never justified. And Condi of course knows all of this because she was on the inside of the machine, which is why she adopts this stiff, haughty demeanor. Because she resents having to be on the defensive. She finds that exceedingly insubordinate of Lawrence.


How easy is it to murder an individual person and get away with it? Maybe not that easy. How easy is it to murder people by the thousands and get away with it. That, my friends, is MUCH EASIER. It only needs to be cloaked in policy and done for "national security," based on the INTELLIGENCE PROVIDED. This is exactly what Condi takes great pains to explain to Lawrence. Even if some people have to die, it's always going to be worth it.

Condi says, starting before minute 4:00: "Nothing of value is ever won without sacrifice. Of course, the lives lost will never be brought back. But in Iraq, that is NOT a threat to invade its neighbors, NOT a threat to reconstitute its weapons of mass destruction, NOT a threat to pimp to play uh Palestinian terrorists uh as suicide bombers. That's gonna be a better Iraq, and a better Middle East. And so, in fact, uh I think that what we did in Iraq will be demonstrated by history to be an important part, an important pillar, of a new Middle East." 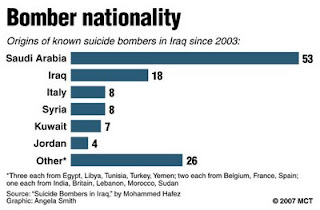 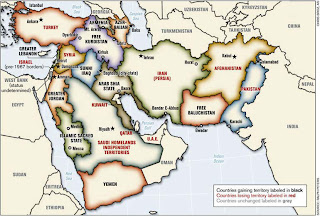 And here's Iraq, the "better" Iraq that Condi thinks exists, with half a million people living in garbage slums surrounding Baghdad. 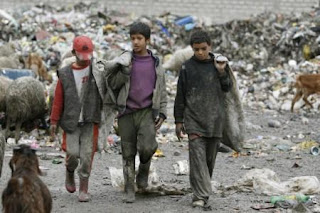 "We lived with injustice during Saddam, but now it’s worse," he said. "The government does nothing." ~ Thijel Ebrah, 58, father of five

"Those people need to pick up garbage because there are no chances to work," said the governor, Salah Abdul-Razzaq.

"In the future, those people will have to find jobs," he said. "That’s what we want, because they are a bad mark on our society." ~ Baghdad’s mayor, Saber al-Essaw 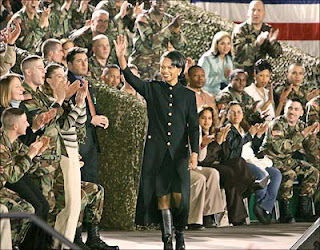 How loathesome is Condi Rice?
There aren't words.
Posted by A. Peasant at 10:18 AM

I suspect that Egypt and Tunisia will go the same way as Iraq.

Is it just me or do other people look at that woman and think she is a maniacal ghoul that would delight at the feast of mutilated babies?

At least the loathsomeness of these entities, like dickhead, rummy, and all the rest is blatantly out in the open for all to witness and ID, as they pull the stakes out of their chests and rise up again to 'entertain' us in their final moments before they slither into their assigned hell-holes forever.
wv: kings - no shit! past and future kings and queens of the underworld

she is vile. i am at a loss for words to explain how vile.

Hi A.Pez, Yep Much more than vile..
i'm waiting for her to unmask like those aliens from "V"..YUCK..
a true psychopath.
But our PM here gives her a run for the money in the VILE stakes..
great post!
Cheers A13

Hey AP,...What a monster; time to start voting from the Clock Towers? Ha haa! Why don't loner/sniper/gun-toting/Mk Ultra fruit-cakes ever go and hang out in the car-park of Congress?

With all the lies and duplicity, all the BS that the red-haired lezzo in rothschalia has done and caused, surely there's a nutter floating around that has a firearms licence?

Actually there are words for that hard-dried tack of a hellbitch. That satan main-lining, sadistically psychopathic war criminal. With that soul-vacated, leering evil countenance, that puts a shiver down the devil's back. A feminised combination of Dick Cheney meets Idi Amin with a side of J. Edgar Hoover.

Then there's Jack Bowel and the sanctified shitmop Keifer Sutherland, who actually believes he is Jack Bauer when he emulates a besotted Popeye firing booze down his gob. Karma has made Keifer a drunken wash-out who rode out the gas fumes of fame once people caught on that '24' was just a show to glamorise torture and prepare the world for the advent of a black president. Life imitating art? or just carefully scripted "prophecy" propagandised?

well said HHQ. MAN you can string together some great insults! i think with people like condi and gillard, hillary etc., for me their perversion of the feminine is so disgusting that i don't consider them women. but i don't know quite what to call them either. however, this works. :D

V, yah funny how that never happens. you'd think with all the nutters and all the guns, and all the anger... well then again we had the sacrificial lambie gabby giffords and her miraculous recovery. but judge roll wasn't so lucky.

Condi "you have to act on the intelligence you have"

"you have to act on the intelligence you have created"

How loathsome is this woman?

I can't top HHQ.
The woman is as psychotic as they come.
Does anyone think she believes the words that come from her mouth?
If so she would be deluded.

It's the fault of the "guy" standing behind her with his hand up her dress moving her puppet parts.

But that is not Condi's fault.

Condi is the "Mother" of them all.

I don't know who I hate worse, Condi Rice, Susan Rice, or Madeline Albright. I would love nothing more than to meet any one of them face to face. They would wear my hand print for a long time. I would go to the gulag with a big smile.

kind of sickening how quickly the crowd turns on the brave person willing to tell the truth. and not surprising that condi said 'go to hell.' she will know all about going to hell someday.