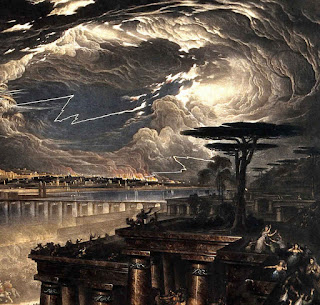 John Martin - The Fall of Babylon

Understand that according to the rules of the game, they always tell us what they want to do before they do it. Whether through predictive programming in the movies, or slip ups on camera, or straight out predictions, it all gets laid out there because that's their defense: they told us, and we consented.

For example: ‘There will be a challenge to the coming administration in the arena of infectious diseases.’ - Fauci, 2017

Then it happened, and instead of that demon getting hauled off to the gallows, we got Fauci Hagiography.

November 2021: Billionaire Bill Gates warns that terrorists may deploy smallpox in busy airports as a biological weapon in the future. Governments must prepare by handing over billions to a new WHO Pandemic Task Force. And this has to be done next year.

https://news.sky.com/story/microsoft-founder-bill-gates-warns-of-bioterrorist-attacks-and-urges-world-leaders-to-use-germ-games-to-prepare-in-interview-with-jeremy-hunt-12459391?ref_src=aimlessnews
All you have to do is identify the terrorists. 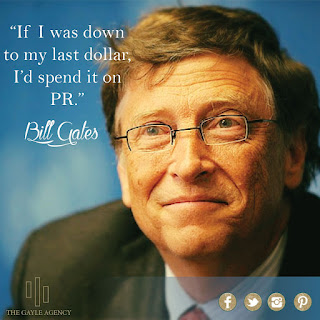 source: Pinterest
No narcissist has ever said it better.
What does Bill value?
He values what YOU think..... of HIM!
Because he knows the magic trick:
YOUR THOUGHTS --> YOUR TRUST --> YOUR OBEDIENCE -->
YOUR MONEY --> YOUR LIFE
How many people are still falling for this demon?
Apparently, millions.
We previously wrote about smallpox several times, learning that Dr. Charles A.R. Campbell, along with a Russian scientist, a century ago discovered the cause: bedbugs cause the disease in malnourished people, specifically people lacking vitamin C.

That a most intimate connection exists between variola and scorbutus is evidenced by the fact that it is most prevalent among the poor or filthy class of people ; that it is more prevalent in winter, when the antiscorbutics are scarce and high priced; and, finally, that the removal of this perversion of nutrition will so mitigate the virulence of this malady as positively to prevent the pitting or pocking of smallpox. A failure of the fruit crop in any particularly large area is always followed the succeeding winter by the presence of smallpox.

This important paper by Dr. Campbell is now in the Wayback Machine: HERE.
And we deduced that IF a case of smallpox was reported, when smallpox is supposedly eradicated worldwide, it would have to be explained somehow:

1) It's not smallpox but some other pox.
2) Bio-terrorists, using their BSL-3 and BSL-4 labs, have let the disease loose.
3) It's a disease that occurs naturally under certain conditions: bedbugs + winter months + poor nutrition / hygiene / poverty / lack of Vitamin C + following crop failures.

The reality could be Door #1, or Door #3, but obviously the Social Engineers will always pick Door #2, which is exactly what Bill Gates told World Leaders this month in not so many words: Terrorists may deploy smallpox in busy airports. Just saying, when these demons tell us what could happen, we should pay attention because That's How They Play. It's like a giant game of Marco Polo, except we are 'it' in the swimming pool, blindfolded, and they are on the pool deck sipping martinis and laughing for the past X years, decades, centuries. We just have to take the damn blindfold off already, climb out of the pool and, you know, SURPRISE! guess what assholes it's time to play a different game while they stumble over themselves drunk trying to get away, Belvedere and crystal shards flying. How do you like it now? But I digress.

One former patient also told The Post that bedbugs were found in the hospital’s ER about a month ago, and he had to hire an inspection company to check his Upper West Side home to make sure none came home with him.
That was confirmed by John Brickman, a partner at NYC Bed Bug Inspections — but he stressed that Mount Sinai was not a particular problem area, with other hospitals also having issues.
“We get calls from everywhere — hotels, department stores, airports and, yeah, hospitals,” he said, stressing that they are “normally just isolated incidents that are treated” and quickly cleared.
“It never stops. Anywhere there’s human traffic you run the risk of catching bedbugs,” he warned.

Here's the narrative engineering literally taking shape day by day this past week, about three weeks after Bill Gates made his prediction:

Shorter: Fifteen vials found at a MERCK facility by a lab worker cleaning out a freezer. DHS was alerted. FBI and CDC launch investigations. The lab worker was "wearing gloves and a face mask."

Smallpox, a disease caused by the variola virus, is considered so deadly that only two labs in the world are authorized to store samples of the virus, including one in Russia and the other at the CDC in Atlanta. Scientists have debated for years whether to destroy any remaining samples, citing the danger of a mishap that could unleash a disease that has been eradicated since the 1970s. Those in favor of keeping samples have argued they are needed to develop new vaccines in response to a new outbreak.

Shorter: False alarm, nothing to worry about.

A little over five years ago, lab workers with the National Institutes of Health did come across such a cache of smallpox samples, some of which contained viable virus. And though there are only two sanctioned sites in the U.S. and Russia where smallpox can be kept for study, scientists do suspect there are a few hidden stockpiles elsewhere. For now, though, there’s no immediate risk of a smallpox sequel.

Citing this 2014 article: https://www.science.org/content/article/six-vials-smallpox-discovered-us-lab   Shorter: Six freeze dried vials from the 1950s found in an old NIH building. And actually every decade or so another stash is discovered, somewhere.

Shorter: Someone from Nigeria. Also in July, another person from Nigeria. Masks probably saved everyone, yet again. Monkeypox causes flu-like symptoms, swollen lymph nodes, and then a rash. BTW monkeypox reemerged in Nigeria in 2017 after a 40 year absence.

The CDC said in a release Wednesday that the patient had recently returned from traveling in Nigeria, and that the agency is working with state, local and international health officials as well as the airline to notify passengers and anyone else who may have come into contact with the infected person.

Because the flight required all passengers to wear masks due to the COVID-19 pandemic, the CDC said that scientists think the risk of monkeypox spreading throughout the aircraft via respiratory droplets is “low.”

Robert Glatter, an emergency physician at Lenox Hill Hospital in New York, was quoted by The New York Times as saying that smallpox can be lethal "even after it is freeze-dried."

11/20/21: 'Smallpox' vials found at Merck lab were mislabeled and didn't actually deadly virus, just the vaccine for it, CDC reveals 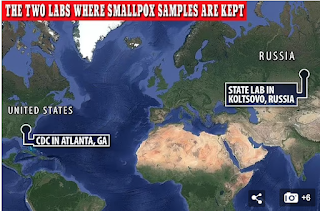 Helpful Map from The Daily Mail

And finally, also from the Daily Mail 11/20/21: 'You all need to get vaccinated': Rare letter from Catherine the Great urging her subjects to get jabbed against smallpox 234 years ago in echo of today's vaccination push goes on sale with portrait of the ruler for 1.2 million pounds

The letter was held in an anonymous private collection but has surfaced at just the right moment. Isn't that miraculous, friends?

You see how they use the Tavistock stress & relief? Tiny doses... danger, no danger, danger, no danger... until the victim is so confused and will cede all decision-making authority.
Theoretically, all we need is some 1) X-wars weather disruptions and 2) a supply-chain food shortage this winter, and 3) bedbugs (which are already in supply); and ..... according to the Disaster Lottery methodology [See: The Geronimo Manifesto, September 24, 2008. Brilliant and prescient.], the odds of malnourished people go way up, and the odds of malnourished people being bitten by bedbugs go up... and therefore, according to our research, the odds of actual smallpox go up. BUT, to be sure, that's still a little risky so there is this whole other avenue of narrative engineering where one of the mystery vials hinted at several times can fall into the hands of "terrorists," just as predicted. And all this can merge with the Nigerian monkeypox, covid and variants, the actual flu, airports, etc.; and like every other psyop the operatives can easily drip misinformation, disinformation, half-truths, outright lies, and create utter confusion and panic in the population, justifying WHATEVER IS NECESSARY. And this time, whatever is necessary will be the Permanent End of our Liberty.

So we recommend you read this important paper by Dr. Campbell, in the Wayback Machine: HERE.

And remember the definition of X-wars:

"Special secret mode of conducting wars. This concept was developed, when it became clear that direct military conflict will inevitably result in nuclear self-destruction. Then the idea appeared that the battle can be conducted while pretending that the conditions of peace are being maintained. In fact, the war is going on, but by the other, "quiet" means. They include the methods of economic and financial diversions, information-psychological technologies aimed at degrading the social structure of the attacked people. Biological diversions infected cattle or agricultural plants or even people, not by some disease causing death, but by an infection planting panic and confusion within the society. Certainly, technical devices causing accidents not only to planes, but to power systems might be created. During the period of "Cold War" much money was invested into the development of the X-war methods and technologies." 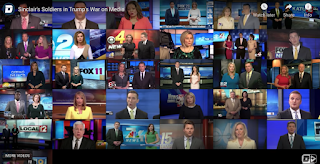 "We have a serious supply chain problem - no where near sufficient guillotines." - anon